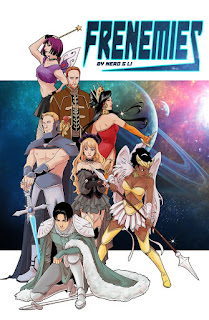 With friends like comics creator Monty Nero, who needs Frenemies? Answer: WE ALL DO! Find out more about his new comics series and support Frenemies: The Lost Planet, launching on Kickstarter today...

Working this time with superstar comics artist Yishan Li (Dark Horse (Hellboy, Buffy), DC (Blue Beetle), Image (Paradox Girl)), The DreamCage favourite Monty Nero has done it again with the first issue of a new four part sci-fi fantasy comic coming out, available for pre-order from today through Kickstarter. Promising to "update the best of classic films like Star Wars, 2001, and Raiders of the Lost Ark with strong LGBTQ and straight characters from around the world", it's stuffed full of original plotting, incredible characters and vivid dialogue, allied to Yishan's brilliant storytelling and character design.

Seven main characters to be precise, all of whom are busy at Camford University when their lives are transformed by a mysterious alien artefact uncovered within the ancient halls. This triggers the hunt for a LEGENDARY PLANET which once dominated our solar system, the site of incredible knowledge which could save our world - or destroy it.

Only one character can succeed and inherit the alien's knowledge and riches - but their rivalry increases when they're telepathically bound together. Given the wealth of alien and human adversaries trying to kill them, they're forced to cooperate to ensure one of them succeeds. But who will it be? 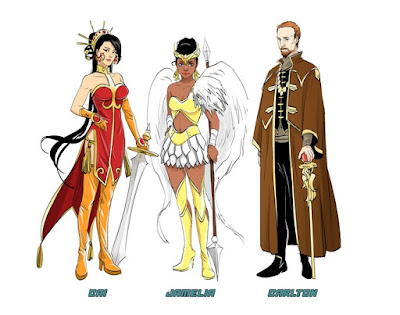 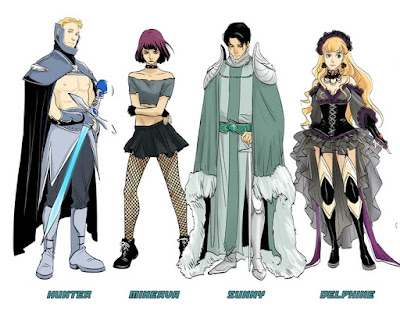 Jamelia - an angelic bisexual genius, unwilling to compromise in the face of annihilation

Carlton - an irascible Professor of Mathematics desperately searching for his lost son.

Hunter - a rich, bi, sporty, US entrepreneur whose motivations are as dark as his family history.

Delphine - an icy French cosplay princess with a lust for science, social climbing, and deception.

It's time to back your winner!

No, really, you CAN actually back a specific character as one of the perk choices in the crowdfunder. For that you'll get a limited edition art print of Yishan's fabulous character design, SIGNED by both her and Monty, along with bookplate art, a signed (and doodled in) first edition print issue of the comic, as well as a digital issue, and your name in lights, well inks, in the book as a "founding fan". There's also rumours that whoever backs the character that ends up being the eventual winner at the end of the comic's 4-issue series may be in line for a special extra prize. Be warned though, these are STRICTLY limited so get your skates on and back your favourite as soon as you can.

Don't worry if you do miss out on one of those though, there's plenty of other great perks on offer, from just pre-ordering the comic, to getting different cover variants, art commissions, catch up issues of the cult classic Monty Nero comics series Death Sentence Liberty, and the now infamous Montynero Experience will be up for grabs once again. Such a great perk!

Anyway, we'll have a review for you soon and will be catching up with Monty himself for a chat next week to find out more about making Frenemies, by which time you'll all have backed the crowdfunder and pre-ordered your own copies of the comic, won't you? WON'T YOU...

You can support the Frenemies: The Lost Planet Kickstarter here