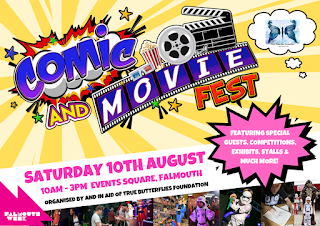 This summer, the domestic abuse support charity The True Butterflies Foundation are presenting a comic and movie fest day in Falmouth's Event Square in August as part of Falmouth Week...

This is the second year of the event, which is aiming to raise money to build up the children's part of their foundation, Little Wings, and they are looking to build on the success of their debut fest last year, which saw special guests actor Julian Seager (Fisherman's Friends, Death Race 4) and Michael Henbury (Star Wars, Labyrinth) attend, along with cosplay competitions, make-up artists, comic book creators and traders covering all areas of the comic and movie world, from indie to vintage.

Already announced for this year is a parade by Force for Charity, a Star Wars themed costume/ cosplay group who raise money for charity in Devon and Cornwall, but the organisers are still on the look out for traders and creators in the area who would like to take a stand at the event. If you are interested in booking a place to exhibit or trade, you can contact the event organisers via their Event Facebook page. 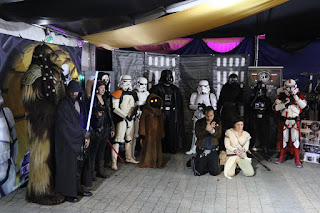 Cosplay for all ages is also going to be very much encouraged at the event. In the months leading up to this year's event there are monthly kids' workshops run and designed by True Butterflies Foundation, with the help and advice of brilliant cos players, film experts and artists who have given both their time and expertise to help. This gives any child interested in cosplay and film a chance to immerse into their imagination and create props, costumes and also the opportunity to learn how to create short films. The workshops give children space to mix with like minded peers to talk and be creative and the children attending these (now fully booked) workshops are excited to show everyone the amazing costumes they have built.

Here's a look at what happened in the first of the workshops, courtesy of their local blogger The Distinguished Geek


The True Butterflies Foundation was founded in 2012, as a Facebook support group for victims of domestic abuse, by Angela Lowe. Angela, herself a victim, struggled to find the support she needed after leaving her abuser and so set up the page to speak to others in a similar situation and hopefully support each other through the tough times - those nights when the kids are asleep and you're sitting alone, scared as to what may happen; those moments when you hear a bang outside and are wondering who's there; the times when you are about to go into court to face the judge and know you need to reveal all that has happened to you.

The page went from strength to strength and grew with members world wide all working together to support each other through a traumatic ordeal and find a way to move forward with their lives.