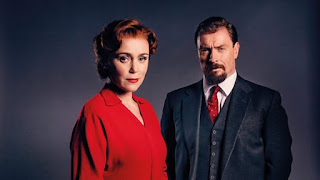 Starting tonight on BBC Two, find out more about the Cold-War drama series Summer of Rockets, from the writer and director Stephen Poliakoff...

"Summer of Rockets is a six-part series, set in 1958, which was an extraordinary year. It saw the end of the debs [debutantes] being presented to the queen. It was also a time of great fear of nuclear war. The Cold War was at its absolute height and it ended with the Notting Hill riots - a reminder of the racial tensions that were bubbling up. All these things came together within a few weeks in the summer of 1958, that’s why I’ve always been fascinated by that time and thought it was a great setting for a drama.

We follow Samuel, who finds himself caught up with the Secret Service and involved in the mystery which he has to try to solve. Hannah, his daughter, is desperately trying to find her own identity and having to do this grizzly season. Sacha, the little boy, is sent off to boarding school, which is closely modelled on the boarding school that I went to.

Summer of Rockets centres around a family - modelled closely on my own - that gradually gets caught up in the tensions of the Cold War. The story is fiction, but it has many elements that are true. Sascha, the little boy, is sent off to an austere and frightening boarding school, just as I was. Samuel’s firm, the invention of the pager, the use of deaf workers and, most surreally, being suspected by the Secret Service of bugging Winston Churchill’s hearing aid, that’s all true.

When you make a period drama, you are conscious that you must speak to a modern audience and that there may be resonances. The most important is the fear of Russian penetration, which dominates the story of Summer of Rockets, but also dominates us now. But also the sense of technology exploding… these are all very urgent concerns for us at the moment and they’re all contained in the summer that these characters lived through.

Another challenge that I set myself when writing the story was that I had big set-piece sequences happening - one on The Mall, one inside Buckingham Palace, one in a big stately home with military activity… and when you’re creating these big set-pieces you need an incredibly good, big team around you. We’d all worked together before so that was a great short-hand. We all tried to make it as vivid as possible and not like we’re staring into the past from a height, not like we’re looking into a fishbowl.

When Samuel and his family meet the Shaws, Samuel is entranced by them. Linus Roache’s character Richard is a war hero and a famous man. Keeley Hawes wonderfully plays Kathleen, an aristocratic lady, incredibly poised. With them, we see very early on in the story that there is an underlying pain and that something is very wrong.

Arthur [played by Timothy Spall] is a charming character, but you feel early on that there may be something a little bit worrying about him - he asks very incisive questions. Timothy Spall’s great warmth and individuality as an actor means that you have to work out if he is a good character or a bad character, to put it simply. That is a very powerful tension in the story.

Hannah is incredibly resistant to doing the season. She’s quite a strong-willed character and has an original mind. She’s very interested in things going on around her. Lily’s wonderfully illuminating performance encapsulates all of that. 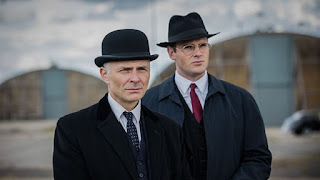 Although the story is fictitious, a lot of the details and some of the incidents are based on what happened to my family.


My father (together with my grandfather) invented the pager for St Thomas’s Hospital in the late 1950s, having witnessed the method by which doctors were then summoned a chaotic mixture of bells and frantic tannoy announcements.

Their invention, though adopted by one or two other hospitals, was thought too revolutionary for government departments or for industry (and certainly for the general public) and they struggled to avoid bankruptcy for many years.

My father’s firm also made hearing aids, and one of their customers was Winston Churchill. My father serviced Churchill’s hearing aid when he was Prime Minister, during his second premiership, and this entailed several visits to see him at No.10. The Secret Service became suspicious of a Russian having such access to No.10 and the Prime Minister. My father and grandfather were put under surveillance.

The head of MI5 Roger Hollis wrote to Churchill’s private secretary recommending that my father and grandfather should be prevented from continuing to service Churchill’s hearing aid in case they had turned his hearing aid into a bugging device and were somehow listening in to all the secrets of the cabinet room. My father and grandfather were promptly denied all access to Churchill and No.10. They continued to be under surveillance for a period in case they were judged to be enemies of the state.

My father, like Samuel in the story, employed many deaf workers in his factory and did pioneering work with hearing aids, greatly improving their efficiency and manufacturing the first one ever to have a volume control. Unfortunately, his competitors made cheaper and less elaborate devices and my father was constantly struggling to make ends meet.

My mother was from Jewish aristocracy, like Miriam in the story, but by marrying my father, a Russian immigrant she was considered to have married beneath her. She did not inherit any of the family’s fortune and lived modestly with my father. Having been raised with many servants she suddenly found herself having to cook her first meal alone with my father. She had never even boiled an egg up that point.

Although the story of Kathleen (Keeley Hawes) is fictitious, there is both a historical basis to what happens to her and her husband and also a personal connection to my family. My Russian Jewish father was very keen to assimilate himself into English life and customs. He was entranced by 18th century English architecture and by the inhabitants of big houses. He would have loved to have owned an English manor house himself but his dream was that one of his children would marry an aristocrat and inherit an estate. He would have been bewitched by the house that Kathleen lives in and by the style and the seemingly untroubled luxury of her life.


Summer of Rockets starts tonight on BBC Two at 9pm. The full series will be available as a box set on BBC iPlayer after episode one.
Email ThisBlogThis!Share to TwitterShare to Facebook