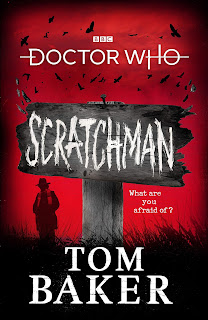 The book cover asks "What are you afraid of?" Tony Cross finds out as he read the Doctor Who novel Scratchman by Tom Baker, published by BBC Books...

Scratchman is a Fourth Doctor novel written by the Fourth Doctor (assisted by James Goss.)* It’s origins lie back in the mid-70s when Tom Baker and Ian Marter discussed making a Doctor Who film. Apparently, they wrote a script or were in the process of writing a script when Star Wars came along and basically made them realise that there would be no chance of it getting made. It has been mentioned in interviews and now out of the misty past it comes.

It’s part of that process which has been filling gaps in the Doctor Who past: Big Finish have made ‘Missing Adventures’ from scripts that never quite happened, James Goss has been allowed to novelise the Douglas Adam’s Doctor Who scripts and Eric Saward’s ‘Resurrection of the Daleks’ and ‘Revelation of the Daleks’ novelisations are also coming. Thus, meaning that there’s a novelisation of every single Classic Doctor Who story. The gaps have been filled. Nothing from Doctor Who’s past is likely to escape this process. The question, of course, is whether pulling these things into the light is worth it.

In the case of ‘Scratchman’ I think it is. It’s a Doctor Who story told from the point of view of the Doctor, so we get to see what Tom Baker thought was going on in the Doctor’s head, which is a fascinating exercise in and of itself. The story takes the form of the Doctor on trial and him trying to convince the Time Lords that what he was he was doing was for the good of all and that they should stop sitting on their hands if confronted with an existential threat. In ‘Trial of the Time Lord’ style it allows the action to be broken up by moments of confrontation with those putting him on trial.

The story starts on an Island. There are Scarecrows that aren’t quite what they appear. Indeed, the first half-ish of the book is intensely creepy. The Scarecrows are a horrible concept and they are effectively used. It feels like a Hammer story.

The second half of the book involves arriving in ‘Hell’ and taking on ‘The Scratchman’ in a bizarre series of games plucked from Harry Sullivan’s mind, including a giant game of pinball. This whole section is a surreal masterpiece and makes you realise that the whole idea of making a film based on this story was totally impossible. It’s a triumph of the imagination though.

It doesn’t quite feel like a Doctor Who story though and I’m not sure why. Perhaps it is the first-person narrative. Perhaps it is something else. That doesn’t stop it being a fine read and part of me wishing someone would have a go at making it as a film. If you’re a Doctor Who fan, and you are a bit picky about what you buy then I’d say this one is worth adding to your collection.


*How much of this is Tom Baker’s work and how much is James Goss is, of course, moot. It doesn’t really matter. So, this will be the last time it is mentioned.