Book - The Vinyl Detective: Flip Back 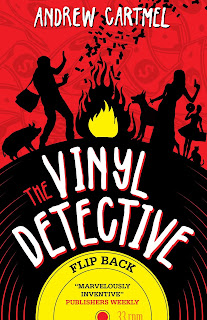 Tony Cross gets back into the groove and reads The Vinyl Detective: Flip Back by Andrew Cartmel, thanks to Titan Books...

This is the fourth book in the ‘Vinyl Detective’ series. [Read Tony's reviews of the other books here - Ed.] Andrew Cartmel has created an interesting set of characters who live in a world that is like but not quite the same as our own.

Our – still – nameless hero is a likeable man thrust into difficult and unpleasant situations protected by his girlfriend Nevada (who knows her way around a gun.) These situations normally begin in a similar way. Someone – an unknown client or a friend – asks him to find an incredibly rare album or series of albums. It all seems straightforward but somehow this search creates ripples or jog memories that leads to violence. People start to die. Sometimes they attack our hero, but he refuses to be cowed and eventually solves the mystery.

This is what happens in Flip Back more or less. And whilst Cartmel’s writing is still up to snuff, Flip Back was the first of the books that I found I could put down. The first three I read in a couple of days as I couldn’t put them down. This one took a bit longer.

Here his friend Tinkler, trying to impress a woman, asks the Vinyl Detective to find a ridiculously rare album, Wisht by Black Dog. In doing so we discover that there is a bit of darkness in the band’s background – of course – and issues between members of the band. People try to kill other people. Clues are laid. Stories told. It’s all rather interesting but the pacing is a little off. It doesn’t race along. It’s more like a marathon than a sprint.

I think the reason for this is that the formula I outlined above is starting to feel a tad formulaic. I could see where this book was going from quite early on. It didn’t stop me enjoying the book, but not quite as much as before. Now, I don’t know whether this is a problem that can be solved. This is the Vinyl Detective after all. The formula is part of the fun. Fortunately, I am just the reader and not the writer, so I’ll leave it to Andrew Cartmel to solve. Yes, the critic as coward.

I still think there is life in the character but a little twist on the formula in the future might breathe a little fresh air in. Let me tweak that thought a little. The characters – all of them – are the strongest part of the book. They all, even (perhaps especially) Clean Head, the black cab driver, feel like characters that have a life when the Vinyl Detective doesn’t drag them into his adventures. Or – to be fair – they drag him into their problems, which is what his friend Tinkler does in this story.

Perhaps I’m over-thinking this. After three superb books to expect a fourth would be miraculous and, as I’ve said, this isn’t a bad book it is just a little average. Which based on the previous books is a little disappointing.