Documentary - The Cricket Kings of Queens 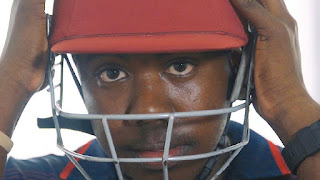 Tony Cross was bowled over by the short documentary The Cricket Kings of Queens by Hannah Keyser, currently on at Sheffield Doc/Fest...

The only high school varsity cricket program in the country is in New York City. A decade after the program’s debut, the John Adams High School Spartans are attempting to go undefeated all season. The immigrant-heavy Queens school is a cricket powerhouse, despite being overcrowded and academically underperforming. We follow three players through this definitive season: Captain Richie—a serious, scholarly senior who is eager to extend his cricket career beyond graduation. Star player Alix—an incredibly talented cricketer who struggles to display the maturity of a future captain. M.D.—a contrarian who plays with heart, affectionately dubbed “water boy.” The cricket pitch provides an escape from a culture that is increasingly intolerant of immigrants, especially Muslims. For these kids, it’s the chance to capture a taste of classic American high school glory.

The Cricket Kings of Queens is a short but rather lovely documentary about the John Adams High School Spartans, who are a cricket team. Yep, a cricket team. In America. Who knew? Well, anyone who can remember that the first ever cricket international was played not in England but in New York. Or who has read Netherland by Joseph O’Neil. Indeed, I thought of that book a lot when watching this.

The team plays in a park with an artificial pitch. It’s made up of players from former British colonies who have found themselves in the United States of America: Bangladesh and Guyana come up a lot. Some of the players have been through a lot to get to the United States. Captain Richie, who comes from Guyana, didn’t see his mother for 11 years. Some of the team aren’t necessarily legal citizens. The horrible figure of Donald Trump casts his foul shadow over the film. As does the change in attitude to Muslim immigrants since 9/11.

There’s a lot touched about in this documentary, which doesn’t even last 30 minutes. I could have happily spent more time with these men. Including their coach, Alex Navarette, who came from Uruguay and knew nothing about cricket. I’d have been interested in finding out more about him and how he ended up coaching cricket in a New York High School.

There’s something admirable about the whole team though. They’re the best school team in New York. And again, I wanted to know how there ended up being a New York High School cricket competition. Who runs it? This film feels like it is sowing the seed for something much bigger. I’d happily watch a feature length film about these guys, but perhaps we can get too much of a good thing.

Captain Richie gets a chance to test for the US National team and wants to play cricket for a living. Then there is Alix, the star player. He looks the part but doesn’t seem to quite have the right attitude. Some of these guys might have genuine potential, but how are they ever going to become professional cricketers? Is there a scouting network out there? The other player we see a little more of is MD, who is the team joker. Again, both with him and Alix it would be good to know more about them and their stories.

So, as we are in the middle of the Cricket World Cup (and not far off another Ashes Series) I would say give this film a watch and I suspect you’ll find it as enjoyable as I did. It’s personal and political without taking a hammer to a nut, but most of all it is the story of a group of likeable people who probably deserve a break. Watch it.

Find out more about Sheffield Doc/Fest on their website