Film - Asterix and the Secret of the Magic Potion 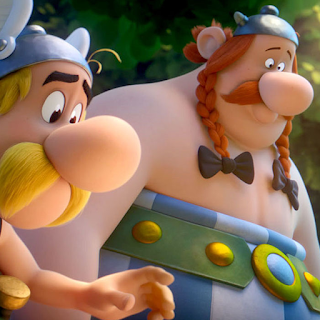 Susan Omand had the Gaul (sorry) to watch Asterix and the Secret of the Magic Potion at EIFF...

I am a huge Asterix fan, I always have been, collecting the Goscinny et Uderzo books since childhood and watching all the early animated films. I was not, however, a fan of the live action remakes which came out about 20 years ago, even though Gerard Depardieu was in them, because, for me, the characters didn’t work in that format. This led me to be dubious about the CGI reboots which started in 2014 too, again I felt that “my” Asterix should always be a 2D comic/cartoon, so I gave The Mansions of the Gods a body swerve at the time, purely through prejudice and a refusal to have a precious canon spoiled again. However, thanks to Edinburgh Film Festival, the latest, again CGI, Asterix film came on to my radar this week, so I decided that I should give it the benefit of the doubt and not condemn it before I had tried it.

What a fab little film! Although the animation style took a little getting used to, I soon literally forgot that it was CGI rather than cel animation and my brain let me enjoy the story for what it was.

Asterix and the Secret of the Magic Potion is an original story, so not lifted or amalgamated from any of Goscinny et Uderzo’s comics, written by Alexandre Astier who also co-directed the film with Louis Clichy. The main plot involves Getafix, the druid in Asterix’s village, being so shaken, physically and mentally, from a fall from a tree that he searches for a young druid to act as successor to him and be guardian of his secret potion recipe. The potion gives the drinker superhuman strength and speed and has, up until now, been the only thing that kept the village the only place in France that was safe from the over-powering conquest of Rome. Word is sent out to gather the Council of Druids, using the innovative communication method of telling the wild boars that roamed the land, so that a successor may be found from the druidic apprentices. However, one baby boar (boarlet?) gets lost and happens upon an evil druid, Demonix, who gets wind of the search and sets out to influence the choice of successor so that he can get the potion to sell to the Romans.

Astier has managed to capture the original feel of the comics’ stories incredibly well and the characters are just as I wanted them to be; Asterix, the village Champion, was grumbly but stoic, Obelix, who fell into a pot of secret potion as a baby, was always up for a fight or a feast with his little dog pal Dogmatix and the druid Getafix was the easily distracted spellcaster that he should have been. Even the minor characters, like the pompous chief of the village Vitalstatistix and the effete but bombastic bard Cacofonix were like their comicbook counterparts. Talking of the comicbooks, there’s something that I think would have made this film even better for people unfamiliar with the characters. At the start of every book there is a page with that introduces each character in the story with a picture and paragraph about what they’re like and how they fit into the hierarchy. This way you also get the extra laugh of the pun-filled names, both of the original and new characters, one of which in this film almost passed me by but is truly deserving of comment and applause – the Roman Senator Tomcrus (pronounced Tom Cruise!) If they could add something like that introductory sheet in, either as a pre or post credits thing to the films it would be brilliant!

So I admit it, I was wrong to prejudge. I take it all back, this film is a very worthy addition to the Asterix portfolio. It’s fun and laugh out loud funny, there’s a lot of clever humour, and it is very family friendly while not being stupid or puerile. The characters and, yes, the animation, is brilliantly done and, if Astier can keep coming up with new stories as good as this one, that little village in Gaul is still in very safe hands.

Asterix and the Secret of the Magic Potion is on at Edinburgh Film Festival today (22nd) and 29th. Book tickets here.