Film - The Flip Side 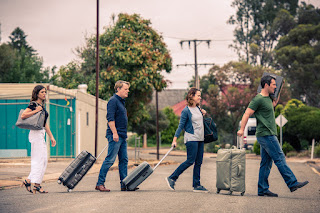 On tonight at Edinburgh International Film Festival, Susan Omand heads down under to watch The Flip Side...

Anyone who knows me will realise that rom-coms are not my usual choice of film … but Eddie Izzard was in this one and I’m a little bit in love with him. So I watched it.

Eddie Izzard stars as superstar British actor Henry, who re-enters the life of would-be chef Ronnie (Emily Taheny) five years after their romance on a film set. Ronnie now lives with her boyfriend, Jeff (Luke McKenzie), and, when Henry arrives with his French assistant and lover, Sophie (Vanessa Guide), the foursome head off on a road trip. Cue sexual tension, misunderstandings and a taste of the outback that challenges them all.

The synopsis above doesn’t really do the story justice. Ronnie is more than a would-be chef, actually running her own restaurant in suburban Adelaide. Only the restaurant isn’t doing well, the bills are stacking up, Ronnie’s mother is in a home that needs paying for and Jeff, well, Jeff is a writer who is oblivious to all the financial difficulties, as well as the fact that Ronnie and heart-throb actor Henry Salbert had “a thing” years before. Into this mess comes a phonecall out of the blue from Henry’s assistant, Sophie, saying that they’re in Adelaide for a special screening and could they all meet up for a drink.

The follow-on from this phone-call to the actual road-trip is cringeingly, but laugh out loud, funny as the situations they find themselves in get more and more awkward. The tensions, sexual and otherwise, across the table at meal times is palpable as the already complex relationships get even more tangled up. Henry and Ronnie obviously still have chemistry, even though Ronnie is spitting mad at him for walking out on her all those years before, Sophie gets jealous and flirts outrageously with Jeff and Henry is using Jeff’s book as a way to spend time with Ronnie. It’s all very confusing and really good fun, with superb character acting until about three quarters of the way through the film.

You see, there’s a reason that rom-coms aren’t my thing. Usually they’re too schmaltzy or too heartbreaking, and this one managed to miss both of those stools for me, which annoyed me even more.  For me, the ending that the writer went with was a bit of a let-down. Everyone acted out of character and it all fell quite flat as the tangled mess unravelled in a rush leaving me feeling, not happy, not sad, but more dissatisfied at the end. But that’s just me. Other people will see it differently.

So, what about my reason for watching this one? Eddie Izzard. He was fantastic as Henry, he oozed surface charm but he also portrayed a strong sense of the man underneath the actor’s façade and his need for reality and normality which was quite melancholy and touching. However, even though he stole pretty much every scene he was in, he was well matched by Emily Taheny who filled her fairly neurotic role with great character and emotional depth, making me immediately empathise and root for her. The supporting characters of Jeff and Sophie were vacuous and annoying throughout the film for me, so if Luke McKenzie and Vanessa Guide aren’t like that in real life, they were also brilliant actors! There are a couple of smaller parts in the film though that also deserve a mention – Ronnie’s dementia-stricken mother Iris, played by Tina Bursill, had a superb light touch to the comedy of her character and a marvellous line in unintentional insults that was just so, well, motherly. And Tiriel Mora, as the garage mechanic in the little town where the car breaks down, adds some much-needed levity at that point in the story.

So I didn’t hate it, it was an enjoyable enough film and, if rom-coms ARE your kind of thing, you may well get more out of the story than I did. I would still recommend that everyone watch it though, because of the stunning Australian scenery. And Eddie Izzard.

Find out more and book tickets for tonight or 23rd June here.