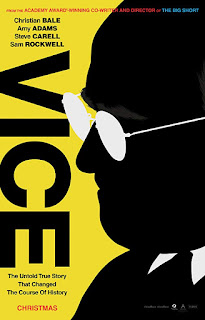 The film's tagline says "Based on the True Story You Were Never Supposed to Know" so Steve Taylor-Bryant obviously wanted to know and watched Vice...

From being a Yale University dropout doing odd jobs in early-1960s Wyoming, Dick Cheney decides to take back control of his life, after his sweetheart and future wife Lynne Cheney's urgent ultimatum. As an intern during Richard Nixon's administration, Cheney grabs the opportunity to join the staff of his mentor, Donald Rumsfeld, who takes him under his wing, paving the way to rise through the ranks of the White House. After losing his job during Jimmy Carter's presidency, Cheney reluctantly accepts George W. Bush's proposal to be his running mate--a decision that would grant him the power to pull the strings of foreign policy, especially after the fateful and devastating 9/11 terrorist attacks.

I love films based on true life, I particularly like films that are based on facts and then smartly put together in an entertaining way. One of the best examples of recent years was The Big Short which took a complex issue about Wall Street corruption and those involved in the market at the time, cast it incredibly well, and took a subject that could have bored people senseless and actually entertained them. It also educated a few but didn’t feel like school, which is always a bonus, but for those of us well read on the matter at hand it just nailed down what we knew in a visual way that shocked more than maybe the words on the page had. But, with The Big Short in particular, Adam McKay found a way to make the complexities of reality into almost blockbuster fare. He’s back doing the same with Vice, and the film only works because of the magical touch that McKay has, the extraordinary way he mixes actors with real life footage, narration, set pieces that drive that narrative, but mainly his way to be utterly partisan without necessarily offending those whose sensibilities aren’t in line with his.

A lot has been said about the way the cast transformed themselves for their roles and, yes, everyone deserves plaudits for their performance. Christian Bale especially, who puts his body through so much for his craft and, by modern day in the film, he was almost indistinguishable from the real man. Amy Adams was wonderful, Steve Carell had a few moments where he nearly dropped Rumsfeld and became his character from The Office, but not enough to stop the enjoyment, and Sam Rockwell as George W. Bush was as reliable as you’d expect from an actor of his magnitude. But there’s no point who having a wonderful cast of cosplaying tribute acts if there is no substance to their prospective roles and the screenplay was witty, smart, frightening, and very real all at the same time and, with the narration coming from [redacted due to massive spoiler], a sense of humour runs throughout the movie that elevates it far above the sketch show fodder I feared it would be.

McKay played out all Cheney’s greatest hits, DUI’s, false loyalty, greed, heart problems after heart problems, shooting a friend and then getting him to apologise publicly for it happening, and proves beyond a shadow of a doubt who held the reigns of power in the Bush/Cheney administration. He nailed beat after beat with a mixture of anecdote and fact, and the film is just a perfect example of what can be done with subject matter that may not immediately spring to mind as commercial. The mid end credit scene in particular just sums up society with perfection and, for the rest, we are just voyeurs looking at the unimaginable abuse of power unfold.

Vice is as perfect a film as is possible to make on the subject, considering how complex it could be.