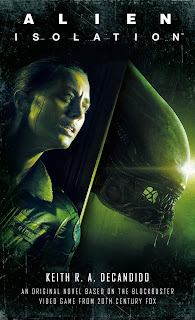 Published next week by Titan Books, and based around the video game of the same name, Alwyn Ash read Alien: Isolation by Keith R. A. DeCandido...

One of the saddest things about Alien isn't that Ellen Ripley lost her crew-mates aboard the Nostromo at the hands - or jaws - of a vicious killing machine, it is the heartbreaking fact that she never returned home to Earth in time for her daughter's Eleventh birthday, and that she never got to see Amanda "Amy" Ripley EVER again! In Aliens DIRECTOR'S CUT we get to view the moment when Carter J. Burke, junior executive for the Weyland-Yutani Corporation, reveals that Amanda Ripley-McClaren died at the age of 66, two years prior to Ellen being found in deep space. She had died of cancer. However, what we as viewers never got to see was Amanda's own personal journey. Until now...

"Dallas wants me on the Nostromo, and they just took on a big contract to bring cargo back from Thedus."

Titan Books have published some terrific titles in the Alien catalogue, my favourite being Alien: River of Pain. However, there had yet to be a title covering Ellen Ripley's lost years, those being her 57 years absent in hypersleep aboard the Narcissus.

November 2137, the crew of the salvage ship Anesidora discover the flight recorder of the commercial space tug Nostromo, which had now been missing for 15 years. Altering course, the Anesidora goes to LV-426, the last known location of the missing ship. Those familiar with Alien won't be too surprised when things turn sour and one of the Anesidora crew gets attacked by a facehugger. With no time to lose, they leave the planet and head to Sevastopol Station where they hope to find help.

"Sevastopol's a supply depot in the region. It's a permanent freeport facility."

While repairing a Lagdamen X34 land buggy, engineer Amanda Ripley is told of the fortunate black box discovery by Christopher Samuels, a Weyland-Yutani Corporation employee. At first sceptical that the information could lead to yet another dead end, she eventually agrees to board the USCSS Torrens and head for Sevastopol. This being Alien, nothing goes to plan and Amanda finds herself trapped on board the space station among armed civilians and a deadly monster stalking the corridors and ventilation system. Her single goal: to locate the flight recorder and find out just what happened to her mother all those years ago.

As the book proudly states on the cover, Alien Isolation is an "original novel based on the hit video game" of the same name from 20th Century Fox. The game was a 2014 first-person survival console experience developed by Creative Assembly, it was published by SEGA for various gaming platforms such as PlayStation 3, PlayStation 4, Xbox 360, Xbox One and PC. Once it was announced that a book would be released based on Alien Isolation, however, you can just imagine my excitement. Author Keith DeCandido, who has written a plethora of sci-fi works including media tie-in books such as Star Trek as well as his own fiction, was tasked to adapt the game. Titan Books couldn't have chosen a better writer. What you get with Alien Isolation the novel is a lot more than just a mirror image of someone else's work, he literally adds depth to the back story of Amanda Ripley. We get to see her childhood, and the moment when she had to say goodbye to Ellen before that ill-fated trip aboard the Nostromo. DeCandido also includes a scene one month before her eleventh birthday when her stepfather Paul gets the news that the Nostromo is being declared "missing in action".

There are other inclusions that I will leave for you to discover.

Celebration and the Xenomorph

Titan Books couldn't have chosen a better time to release Alien Isolation. It is now 40 years since director Ridley Scott gave us the Xenomorph in Alien (1979). The franchise has exploded like a Chestburster, impacting on every media from movies to novels, comics and video games. And collector's merchandise. Though the movies first focused on warrant officer Ellen Ripley, played so perfectly by Sigourney Weaver, follow-up titles such as Alien vs. Predator (2004) and Prometheus (2012) have opened the door for other characters to confront the nasty saliva-dripping creatures.

Considering this is an official canonical expansion of both the game and Alien universe in general, what is there not to love? Published 30th July 2019, you'd be crazy not to board the Torrens with Ripley and explore Sevastopol.

Just pick up your motion tracker, and watch out for bugs.