Book - Auntie's War: The BBC during the Second World War 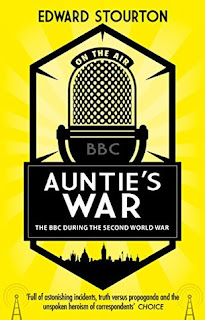 Tony Cross remembers the good old days of the Beeb as he reads Auntie's War: The BBC during the Second World War by Edward Stourton...

Auntie's War is a love letter to radio.

The British Broadcasting Corporation is a British institution unlike any other, and its story during the Second World War is also our story. This was Britain’s first total war, engaging the whole nation, and the wireless played a crucial role in it. For the first time, news of the conflict reached every living room – sometimes almost as it happened; and at key moments:

Radio offered an incomparable tool for propaganda; it was how coded messages, both political and personal, were sent across Europe, and it was a means of sending less than truthful information to the enemy.

Edward Stourton is a sharp-eyed, wry and affectionate companion on the BBC’s wartime journey, investigating archives, diaries, letters and memoirs to examine what the BBC was and what it stood for. Auntie’s War is an incomparable insight into why we have the broadcast culture we do today.

This is an excellent book about the BBC's role as a news organisation during World War Two. It details the political battles around BBC independence in the face of a desire for it to focus almost purely as a propaganda organisation.

Indeed, the decisions made here put the current BBC to shame. The realisation early on that the best kind of propaganda was something as close to the truth as possible strengthened the perception of those listening - both inside and outside the UK - that the BBC was worth listening to. (Although there are exceptions to this - Stourton mentions the reporting on Dieppe as an example.)

Stourton covers how the BBC helped De Gaulle, Murrow's role in broadcasting the Blitz to America (and how that example influenced a changed in BBC reporting style) and the battle between 'black' propaganda & the BBC's desire to tell the 'truth'.

It's purely focused on news etc - although there is a brief diversion into popular programming - but I'm sure that has been covered elsewhere.

Worth a read. Specially to remind yourself of when the BBC actually stood for something.