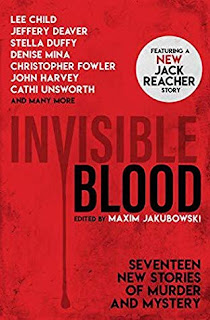 Open the files on seventeen new crime stories to probe the brutal and complex hearts of criminals. Watch as a secretive group of intelligence community officers traces Jack Reacher's steps through Heathrow airport in Lee Child's "Smile". In Mary Hoffman's "Fallen Woman", a journalist on the trail of a secretive drug lord gets caught up in the violent suicide of a young woman in Siena. And in Jeffrey Deaver's "Connecting the Dots", detectives follow the trail of clues in the brutal killing of a homeless man, wherever it may lead… Invisible Blood is a gripping collection of the compulsions of the criminal mind.

Just recently I reviewed a collection of crime dramas from Titan Books, Exit Wounds edited by Paul Kane and Marie O’Regan, and found myself quite enjoying the premise of various authors being given a topic or buzzword in which to base some gripping fiction and, with it being a collection of short stories, I enjoyed having the time to take in a great adventure without losing time from my busy family time. Short stories are perfect for snatching twenty minutes or so here and there without a tired mind forgetting where you have got to. When a new anthology is marketed as above, FEATURING A BRAND-NEW JACK REACHER STORY, you have to sit up and take notice and, whilst Lee Child’s Reacher story is as good as you would expect, it is other authors and tales that appealed more.

As with any collection some stories didn’t resonate, I won't name which ones as that’s not fair on those particular writers as the failing is in my taste not in their abilities, but in the main the stories landed well. All had great twists and left me admiring the skill of each writer, to be able to run you through the wringer in such a short time is quite the skill, and there are some complex tales, some simpler, but all pack a powerful punch.

Highlights this time for me were once again Jeffrey Deaver who impressed so much in Exit Wounds, but in particular were two authors I hadn’t read before who I will definitely seek out more from in Stella Duffy and Johana Gustawsson. Maxim Jakubowski knows his fiction and knows his audience and has compiled some excellent short story telling into a high calibre collection. Sit and read multiple stories or just snatch a few minutes with one at a time but do read Invisible Blood.