Book - Resurrection of the Daleks 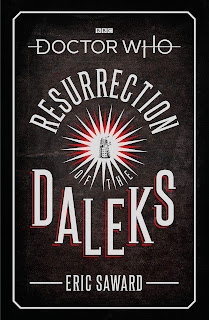 Our Doctor Who expert Tony Cross steps into the time corridor to read the novelisation of Resurrection of the Daleks by Eric Saward, thanks to BBC Books...

So, we’ve been waiting for this novelisation for a long time. And we know how dangerous expectations are.

Before I begin, I should say a little about my feeling about this story, because they may colour my feelings towards the novelisations. The last time I watched Resurrection of the Daleks [read Tony's review here] I found it a fine story ruined by a bleakness of tone that – to use a phrase I get annoyed when other people use it – doesn’t feel very much like Doctor Who to me. Translated that means it doesn’t feel like the Doctor Who I like. It’s violent. And to quote Tegan, ‘lots of good people die…’ More than once. A lot of them die rather unpleasantly.

But what of the novelisation? It’s fine. I don’t think it is brilliant. And compared with the recent novelisations of ‘New’ Doctor Who stories by Paul Cornell, Russell T. Davies, Steven Moffat and Jenny Colgan it is a tad disappointing. There’s nothing much wrong with the writing or the pacing, it's fine.

Eric Saward, who wrote this and whose time as script editor on Doctor Who is controversial, takes one or two opportunities to make digs about violence in Doctor Who adventures. The accusation aimed at Saward’s time in the script editors’ seat is that it got increasingly violent. There’s an element of truth in that, particularly when we get to the Colin Baker era and there’s something lovely and childish about the number of times he mentions ‘violence’. And violence is what leads to Tegan leaving at the end of this story.

Saward also adds a couple of interesting twists to the story. There’s an implication that the Doctor knew Lytton before Resurrection, there’s a long diversion about what the interior of the TARDIS is beyond the control room, including…no…I’ll let you read that bit yourself. I found it amusing and I got the impression this might be Saward’s response to having to deal with tiny budgets and getting the chance to take an ‘expensive’ wander throughout the TARDIS interior and then there’s the Coda, which features Tegan.

It’s almost like Saward is trying to set up a ‘Tegan Jovanka Investigates…’ spin-off. I’m not explicitly against that but it was just a bit of a curve ball at the end of a story that I’m pretty familiar with. I’ll be interested to see how other people react to that Coda.

However, having said all the above, I think Saward – mostly – does what one wants in a Doctor Who novelisation. Characters and events get a little more fleshed out. The television story gets translated into print effectively. This is certainly better than some of the old Target novelisations when you got the impression that the writer was knocking it off in a couple of days whilst focusing their minds on other things but I feel the recent ‘New’ Doctor Who books have raised the bar a little and this doesn’t quite clear that bar.

But still. It’s a novelisation of Resurrection of the Daleks. How can I not be happy?

Resurrection of the Daleks novelisation is published on 18th July