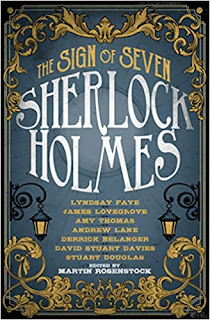 Published next week by Titan Books, the game's afoot as Tony Cross read the new Sherlock Holmes anthology The Sign of Seven...

The Sign of Seven is – and you don’t need to be ‘the great Detective’ to work this out – a collection of seven Sherlock Holmes novellas, edited by Martin Rosenstock.

Sherlock Holmes is, of course, one of the great literary inventions. People have thought him to be real and, even whilst Conan-Doyle was still alive, people were writing pastiche Sherlock Holmes stories and plays. He’s also had a significant afterlife both in literature and in television and film.

The quality of these pastiches is variable. I’ve read some awful books with a character called Sherlock Holmes in them. Fortunately, this is pretty good.

The seven stories here are all entertaining. Most of them feel ‘right’ too, although there is a slight tendency in here to want to ‘humanize’ Holmes. To make him a character that is easier to warm to, which isn’t a terrible crime. It is easy to think that Holmes is putting on a mask.

The last story in particular, ‘Our Common Correspondent’ by Lyndsay Faye feels a little like that. It’s the only one of the stories not written by Watson too. This one comes from the diary of Inspector Lestrade. I like the fact that Faye makes Lestrade a smarter man than Watson often makes him out to be. Indeed, I liked the story itself. But it is the one that feels more influenced by the Gatiss/Moffat ‘Sherlock’ series than by the original stories.

Of the other six stories I liked them all to a greater or lesser degree. I liked that a couple of them play with Holmes’s unofficial role, which allows him to let off a criminal if he feels that their motives were justified. He never approves of murder, but he can see that not all murderers acted out of selfish or ugly reasons.

I enjoyed James Lovegrove’s ‘The Adventure of the Deadly Séance’, which seemed a little cheeky based on Conan-Doyle’s views about spiritualism. Of the rest of the stories I enjoyed ‘Death of a Mudlark’ by Stuart Douglas; ‘The Adventure of the Heroic Tobacconist ‘by Derrick Belanger and ‘The Dark Carnival’ by Andrew Lane the most. The other two stories in the collection both pass the entertainment and rightness tests: they are ‘The Monkton House Mystery’ by David Stuart Davies and The Adventure of the Koreshan Unity (where Holmes and Watson travel to Florida in 1908 to investigate the possible murder of a religious cult leader). I cannot say there is a single dud in there, which is nice.

If you’re a Sherlock Holmes fan and having read the original stories you want somewhere to go next you can’t go too wrong with this collection. It certainly helps that all the writers have a fine track record of writing Sherlock Holmes.

Sherlock Holmes: The Sign of Seven is published by Titan Books on 9th July