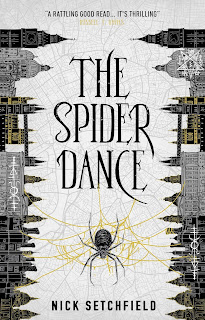 Stepping into a web of intrigue, Tony Cross read The Spider Dance by Nick Setchfield, thanks to Titan Books...

The obvious – lazy (?) – way of describing this novel is James Bond meets Vampires, but it doesn’t quite have that brand awareness of Fleming. And whilst we travel to an exotic location or two (by 1960s standards) it never feels luxurious. Setchfield’s agent, Christopher Winter, doesn’t have that Bond’s panache. This isn’t a criticism by the way because the comparison I would make isn’t to James Bond. It is to the Ipcress File. Winter feels more like Harry Palmer than James Bond. So, if you want a quick elevator pitch for this book it is Harry Palmer goes Buffy.

Which is slightly unfair as this book is a serious one. There’s not much lightness of touch here. Again, not a criticism. Perhaps Buffy isn’t right either.

Anyway, this is a Cold War spy story with occult trappings. In this 1965 there are Vampires – and vampires with a class structure, which is nice – and there are succubi and incubi. There’s a certain implication that God is real too, but a cold and distant figure. Magic exists here too. But the examples we see in this book are dark. It’s used for killing and healing.

When we join Winter at the beginning of the book he no longer works for SIS. He’s gone freelance and ended up working for some London gangsters. (And that line of thought via Guy Ritchie to Gangster No. 1 makes me think that if they get around to making a film of this book then Paul Bettany might make a good Winter. But I digress.) There’s a transaction going down. An odd transaction. It’s about a heart. As is the case with these things it doesn’t go quite to plan, and all hell breaks loose. Not quite literally.

Winter then finds himself drawn back into the realm of SIS. After all, in fiction no agent ever truly escapes the grip of his former employer. And he’s sent off on a mission to bring in a defecting spy. Except it turns out there’s more to it than that. Of course.

It’s an assured bit of story-telling is ‘The Spider Dance’. Setchfield’s alt-world feels possible, even though it is impossible. The main characters all feel like they are anchored in a reality of sorts. Winter is joined Alessandra and Libby Cracknell at points. Neither is an obvious femme fatale. Neither would make a good Bond girl.

The story twists and turns and the final confrontations are nicely played out and the bad guys have what feels like proper motivation for what they are trying to do. Setchfield also writes a number of nice little set pieces, which will play out lovely when the film/television series gets made.

So, if you’re looking for a bit of gothic Harry Palmer then this might be the book for you. It’s certainly neatly written and perfectly paced. This, to my surprise, was the second book in the series. I don’t think you need to have read that book to read this one. I certainly felt like I was stepping into something new. I assume then that there are more Winter tales to be told?

The Spider Dance by Nick Setchfield is released on 16th July