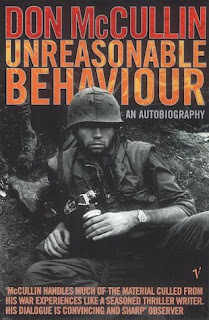 Tony Cross investigates a renowned photojournalist as he reads Unreasonable Behaviour: An Autobiography by Don McCullin…

'He has known all forms of fear, he's an expert in it. He has come back from God knows how many brinks, all different. His experience in a Ugandan prison alone would be enough to unhinge another man - like myself, as a matter of fact - for good. He has been forfeit more times than he can remember, he says. But he is not bragging. Talking this way about death and risk, he seems to be implying quite consciously that by testing his luck each time, he is testing his Maker's indulgence' - John le Carre

I bought this book at the Don McCullin Exhibition, which was on recently at Tate Britain. I am familiar with Don McCullin and his work as the indirect result of watching a TV series called 'Frankie's House'(1992), which was about Tim Page. Page was a British photographer who covered the Vietnam War. From Tim Page's book, 'Page after Page: Memoirs of a War-Torn Photographer' (I think) I first came across mention of Don McCullin.

I realised that even though I didn't know who McCullin was I knew his work. I had studied the Vietnam War at University and McCullin had taken one of the (probably) two most famous photographs from that war. The one of the shell-shocked American soldier staring out of the photograph at you. But other familiar photographs from other conflicts turned out to be by McCullin.

In 2012 there was an excellent documentary released about him, which I recommend highly so it surprises me that I have only just got around to reading it now considering it was published in 1992 (and I don't think it has been updated for this edition, although I am ready to be corrected.) It is the story of his career and life, although after the latter forms more the top and tail of the book than the former.

His career seems to have been a mix of visits to places during terrible conflict and more cultural coverage. A lot of which we here in the UK either quietly ignored at the time or have totally forgotten about now - Cyprus, the Middle East, South and Central America, Vietnam, Cambodia and various parts of Africa. His life was often at risk in these places (and he mentions time and time again journalists and photographers that died in the places he managed to get away from.) His work was either for continental magazines or for British newspapers, initially the Observer and then the Times and Sunday Times.

Indeed, one of the sub-texts of this book might be the decline of British journalism. I think you could date that to the moment Rupert Murdoch took over the Times and Sunday Times and put Andrew Neil in charge. Neil is one of the rare figures in this book that you feel McCullin despises. His appearance near the end doesn't make him look good. I'm sure Andrew Neil's version of the events McCullin describes would be different indeed.

The thing about this book is that it is also a reminder of how quickly we forget. At least when the conflicts don't involve us. Who in the UK now remembers the conflict in Beirut? Or Cyprus? Or... [insert name of conflict here.]

It's a book without frills too. McCullin's writing is to the point. It's never dull.

He lets us into his head a little. His questioning of what he's doing and why he's doing it, especially after a particularly dark incident, is continuing. He seems to be suffering from being a survivor. Or perhaps being a witness unable - except occasionally - to act on what's happening in front of him is a whole different type of guilt.