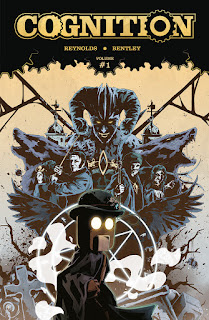 It's "a story about a robot with a human soul and a demonically possessed mouse." Find out more about Cognition by Ken Reynolds and Sam Bentley, currently being funded on Kickstarter...

Cognition follows the exploits of a steam-powered automaton inhabited by a human spirit and a demonically possessed mouse. They are spiritually linked and cannot escape each other but they still manage to battle spirits, monsters and folkloric nasties for the British Occult Secret Service (B.O.S.S.) during the ‘Golden Age’ of the Victorian era.

Good vs evil, spirituality vs technology; this story explores the idea that nothing is straightforward. Thoughts, intentions and motivations only get defined by choice.

Oh… and sometimes the robot hits monsters, while the mouse uses magic.

The latest Kickstarter campaign from Ken Reynolds is to fund a trade paperback edition that collects the first five issue story arc (issues 0-4) of the comic into one 196 page complete and self-contained volume with black and white inner artwork and colour covers and pin-ups. Here’s a look at what some of the (separate) panels are like. 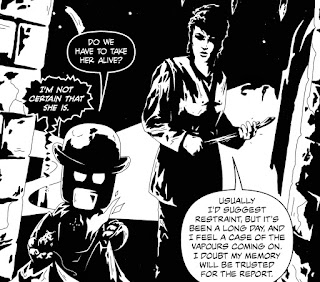 So, what, apart from being able to pre-order the book, can you get for your hard-earned cash? There are several levels of perk available, all neatly named after metals! The list goes from Lead, which gets you a digital copy of the book plus a few digital extras for just £3, to Rhodium, where you can literally bag a bag as there’s a mystery merch grab bag up for… er… grabs, containing prints, posters and stickers, along with a fancy metal bookmark and a cool collector’s box which will fit all 5 individual comics or the new paperback volume, as well as the book itself, ALL for just £30. And there are loads of layers in between too. That’s got to be worth splashing some money on, right?

Still not convinced? What if we said you could TRY BEFORE YOU BUY by getting a FREE digital copy of the prequel issue Cognition #0? Yes, really. Download that from HERE.

So, read the freebie, watch the trailer below and then support Cognition on Kickstarter… or you’ll have a demonic mouse to answer to.

Ken Reynolds was born in Suffolk (1983). He currently lives and works in Ipswich along with his lovely (and tolerant) wife and beautiful, daughter. He has worked in the Graphic Design industry for over 15 years.

Ken has lettered for many independent publishers and creators. Edited three volumes of the experimantal comic anthology Sliced quarterly and draws his own webcomic ‘In Trouble’.

Sam Bentley was born in Stoke-on-Trent, England in 1993, where he still lives and works. He uses both traditional and modern art mediums, and often combines them in his work.

He graduated from the University of Derby in 2015, with a first class honours degree in commercial photography. This helps inform his use of research, composition, lighting and colour.

In 2014, Sam was selected as one of 13 finalists in high profile comic creator Todd Macfarlane’s ‘Lucky 13’ fan art contest. This work was subsequently included in the 250th issue of the Spawn Comic book.