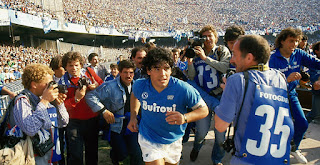 A reminder of Tony Cross' thoughts on the new documentary about Diego Maradona...

This documentary, directed by Asif Kapadia, is almost a documentary about Jekyll and Hyde. There are two people here. There’s Diego, who seems to be fun to be with. Then there’s Maradona. The man. The myth. The right royal pain in the arse. When the story begins, as Diego becomes a professional footballer at fifteen and becomes the main source of income for his whole family and gets his chance to escape Villa Fiorito – a Buenos Aires shantytown. It takes us through his rise, focuses particularly on his seasons with Napoli, where he became almost like a God. And then we see his fall. We start off with Diego. We end with Maradona.

Occasionally you see a glimpse of Diego. In moments where he’s trapped in huge crowds and unable to escape. Where he’s at a party he doesn’t want to be at. But then we see Maradona. The man who can’t show weakness. The man who cheats – both on the pitch and on his girlfriend. Indeed, the match against England in the 1986 World Cup seems to illustrate show both. There’s the ‘Hand of God’ Maradona and the artist footballer Diego dancing his way through a hapless England team who always look like they’re chasing a shadow.

You also get to see what life was like for Diego Maradona in Napoli. It seems relatively OK to begin with but as the Diego led team improves and wins the Scudetto, which was the first in Napoli’s history, Naples becomes like a prison. A prison with prostitutes and cocaine but still a prison. Diego Maradona found he couldn’t leave his house without being mobbed. After Napoli won the UEFA Cup he wanted to leave but Naples President made him stay, which was rewarded with another Scudetto but might have been the breaking of Diego.

That and the World Cup Semi-Final against Italy at the Italia 1990 World Cup. A semi-final played at Napoli’s ground. A semi-final where Maradona pointed out – not unfairly – that northern Italians treat Naples like it isn’t part of Italy most of the time – a point illustrated earlier in the film by the chants and banners of opposition supporters – so why should they expect Naples to support Italy. They should support Argentina. It wasn’t a popular opinion. And when Argentina knocked the Italians out – and subsequently played in the worst World Cup Final of all time against the West Germans – it bought an end to Maradona’s Italian immunity. All the people who had politely looked the other way as his debauched lifestyle became an open secret in Naples started to pay attention. He was arrested, drug-tested, banned from football throughout the world for a year and fled to Argentina. Where he was arrested again. Without football to play what was Maradona?

This film has drive, helped by fine editing from Chris King. Asif Kapadia is responsible for Senna, which is one of the great sports documentaries of all time, and Diego Maradona is another doomed hero for him to get his teeth into. It also does a good job of making Diego Maradona a human being rather than a God or a monster. To a lot of England fans, he’s always been the latter. The little imp whose hand ball – and glee in it – makes him a villain. But there is so much more to him than that. And I’m not sure if anyone could have handled Diego Maradona’s life more sensibly. He was a football who became a prisoner of his own glorious success.

The only thing that seems unforgivable is the way he treated his illegitimate son Diego Sinagra, which is a story that is interweaved into the film. It feels odd too based on how genuinely close he seems to his family. And that in the end was what drove Diego Maradona. He never wanted to end up back in Villa Fiorito and he never wanted that to be his family’s fate either.

Even if you’re not interested in football this is a documentary worth watching because it is about a man struggling to cope with becoming a Messiah. Of course, it wasn’t going to end well but watching this documentary makes Maradona a more understandable kind of fallen angel.