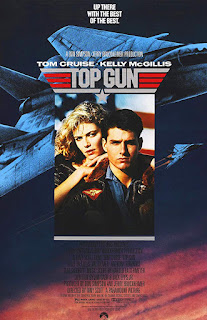 With the first trailer out for Top Gun: Maverick, did the original 1986 film take Kraig Taylor-Bryant's breath away or did he just lose that loving feeling...

When I watched the teaser trailer for Top Gun Maverick, I really didn’t understand what made this trailer so exciting, although I’d later find out that it’s because this trailer relies on the nostalgia of the original, to get its audience excited. But what is it that makes a film like this so nostalgic/so emotional? Well, the only way I figured I could answer that question is by watching the original and break down the best parts of it, which would hopefully, help me better understand the nostalgia that some people have shown for the scenes in the trailer.

If you don’t already know, the plot for Top Gun, from watching it 3 times now, is about a hotshot pilot, callsign “Maverick” (Tom Cruise), who, alongside his wingman “Goose” (Anthony Edwards), are invited to a school that trains the best pilots better. Maverick must deal with the difficult reputation of his father, to prove himself worthy of graduating, whilst also having to deal with his own ego, and the complicated relationship with Charlie (Kelly McGillis), a Pentagon-level instructor at the school. Across the film Maverick has to deal with the loss of Goose, which makes him reconsider even being a pilot, fearing “taking the shot”, both literally and metaphorically. Eventually he chooses to graduate from Top Gun, leading him to be invited to assist in a real-life threat situation, of which his fellow graduates are extremely wary, judging by how Maverick was so shaken by the loss of his friend. Eventually though he proves himself to have changed from being just a hotshot who leaves his fellow pilot, to chase another “bogey”, instead he sticks with his fellow pilots, and manages to save them.

I think that’s one of the things you can’t help but adore about this film, is how Maverick develops. I think from the start of the film he was an interesting character, because he was willing to perform crazy tricks to almost try and outperform everyone else. This piqued my curiosity until we hear him open up about his father’s reputation to Charlie on their first “date”, and from then on, we sort of understand why he tries his best to stick out from the crowd. Because he lost both of his parents, to me, it seemed like he was seeking the attention of his superiors by performing all of his crazy stunts. But of course, he ends up taking piloting a little more seriously, after losing his friend Goose. And to get him to keep flying in the first place, he is reminded by Charlie, that he has to keep flying because it’s the only thing that really makes him happy. Towards the end of the film, Maverick becomes much more mature, in the sense that he would rather teach others to become graduates at Top Gun, than be stationed anywhere as an official pilot. I think his own experience helped him to realise that people will go through the same things as him, so he thinks that helping those people along would be the best thing for him, and that maybe, the school does need more teachers that are open to unusual strategies to win in a dogfight, showing his growth in character. 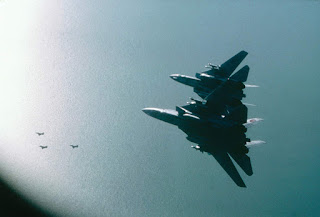 It’s difficult not to mention the music when talking about Top Gun, because every piece of music in this film feels like it belongs here, and I honestly don’t think the film would work without it. The use of different instruments, alongside an electric guitar, makes flying seem wondrous, almost like how the generation who watched this film as children may have thought about the idea of flying. The electric guitar also helps to make it seem reckless and epic, words that would best describe Maverick and his flying, words that may be used to describe those who may have even been teenagers when the film came out too, as we know every teenager has the desire to do something reckless. I also think that the song “Danger Zone”, is particularly important to the film, because it does feel like an epic song that feels dangerous at the same time, it almost seems like the song is hinting at the dangers of flying, that Maverick only really realises when he loses his best friend.

On the other hand, alongside the dangers of losing something, you’ve got the contrast of him finding something new, when training at the flight school, because he discovers his love for Charlie there. Its interesting to see how the scenes cut almost seamlessly between the intense moments of flying, and the more chill, but interesting relationship between the two of them. The choice of music during their romantic scenes together really help to make their romance seem tragic (probably because of how complicated things are, as she is his instructor), but dangerous because of lyrics like “take my breath away”, which I think helps it to fit in with all the other music. But it also somehow really fits with how she chases after him in one of the scenes, to explain something that Maverick wouldn’t let her do earlier.

While on the subject, I do think Charlie is a strong character in this film, because not only is she a character of high rank as an instructor, but she is willing to speak about the flaws in Maverick’s flying, in front of him, to keep their relationship secret from the other pilots and instructors, which again, makes the whole situation seem dangerous, though in a more playful way. I also like how she shows herself to be reckless, when Maverick drives off whilst she’s trying to talk, so she chases him down, and even runs several red lights to get to him. Not only does it show how determined she is to be “heard out”, but it also shows how she is a lot like him in some ways.

When it comes to the “fighter sequences” of the film, it definitely doesn’t fail at being intense for the viewer, being a film that does an extremely good job of intercutting flight footage, and footage of the actual actors, to make it look like the pilots are flying the planes, when in reality they aren’t. It definitely is exciting that in “Top Gun Maverick” Tom Cruise is actually flying the jet, though I don’t know if it will take away the feeling that came across in the original. But I suppose the film does look like it needs to be “modernised”, to be made to look more realistic for a younger audience, I mean, it’s still definitely better than green screening the whole things, as most things are done today.

Despite the limiting effects of the time (to create fighter model explosions. etc possible), the film still holds up in being as intense as it needs to be. Whilst looking dated, the shots used, like the close ups of all the different pilots, help to keep it feeling intense, and help to accompany the explosive effects, and make them feel realistic. The film also manages to compensate for the effects with its engaging dialogue, and memorable quotes, like “your ego is writing cheques that your body can’t cash”, which I love the most as a quote, because it almost makes it sound like he’s being warned that he’ll pay for his own recklessness, which of course, you could argue, that he did. I honestly hope that “Top Gun Maverick”, does as good of a job of either bringing back some old quotes or creating new memorable ones, as this film does, because to me, if it wasn’t for the scenes in between each dogfight sequence, this film wouldn’t be anywhere near as exciting and ambitious as it was, in my opinion. 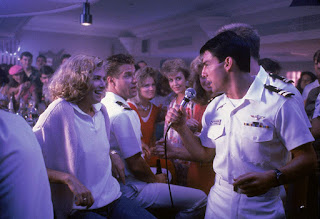 After looking at all these different aspects, it’s still difficult to understand which of these things made the film so memorable from a technical standpoint. However, whilst talking to my dad about what got him so excited about the original film, I found that he thought Maverick was very relatable to himself, in the sense that Maverick lost someone in his life, just as my Dad had at the time. I think from the film I managed to understand that when life gets tough, and you lose someone, you can’t let it stop you from doing what you love/what you’re good at, which for Maverick, was flying planes. I think that it also helped me to understand the older generations better, because, as you get older, you may lose somebody close to you, so I think films like this are very beautiful because they encourage people to remember who they care about, but not let it stop them being themselves.

I can say, though, that there are things that my generation could get too from watching the new Top Gun film, after looking at the more technical side of things, and I am excited for seeing some of the interesting/compelling characters, as well as the incredible scores that were chosen for the original, and are apparently being carried into the sequel. I also think that, since the dog fights are not going to be found footage, they will certainly feel more tense to my own generation, as judging by the trailer, the dogfights certainly look more intense.

So I suppose it is difficult for me to understand what exactly causes the nostalgia for this classic film, though I think the best I can do is have an educated guess that the wait of thirty years has a lot to do with it, and perhaps being young, and running around in the streets back then, helped to make “the need for speed” relatable. Regardless, I can’t wait to hear that classic theme tune again, and maybe see my Dad’s reaction to it back on the big screen, when the sequel comes out next year.