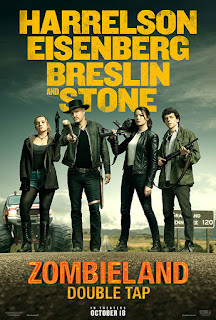 It's time to nut up or shut up again. Watch the new trailer for Zombieland 2: Double Tap, coming to cinemas in October...

In the sequel, written by Rhett Reese & Paul Wernick and Dave Callaham, through comic mayhem that stretches from the White House and through the heartland, these four slayers must face off against the many new kinds of zombies that have evolved since the first movie, as well as some new human survivors. But most of all, they have to face the growing pains of their own snarky, makeshift family.

Added to the cast this time are Rosario Dawson and Zoey Deutch, as Madison and Nevada, as well as later additions of Luke Wilson and Thomas Middleditch. The great news is that Bill Murray is back as a fictionalised version of himself and he's joined by none other than Dan Aykroyd this time!

The film is unleashed on cinema screens on 18th October.