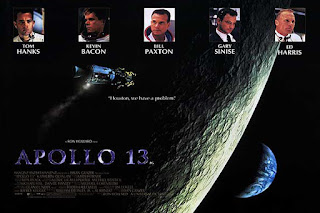 Kraig Taylor-Bryant joins our moon related celebrations today by watching the one that went wrong, Apollo 13...

When it comes to space, the greatest threat that the media industry creates for us in their films is often “Alien Invasions”, or some kind of galactic war. That’s why it often comes as a nice surprise when we get an interesting film involving a trip to the moon, that’s not only a true story, but in which the biggest threat in the film is being lost in space. Now, some might say that a film involving aliens and big CGI battles has more entertainment value, except we know that none of that stuff actually happened. Whereas the events of this film were very real, and Ron Howard manages to do an incredible job of telling the story of the unfortunate astronauts of Apollo 13, who would have been forgotten by history had it not been for the many issues they faced on their way to the moon.

That’s one of the tragedies that this film tackles really. The human instinct to only really care about accomplishments that have never been done before and, when it's been done, people tend to forget that other people achieve the same goals after them but will never be remembered for it. Ironically the team of Astronauts on the Apollo 13 mission did achieve something that was never done before, without intending to, because of course their original mission was to land on the moon. However, on their way there they encounter a great many problems, from a lack of oxygen, to too much carbon dioxide, to not enough fuel to get home, though despite all of this, the ingenuity of mission control helps them to find a way.

Ron Howard does a brilliant job of building tension in the film, to make the less interesting scenes feel more entertaining for the viewers, and to help us feel more concerned for the safety of the astronauts. Ron Howard manages to make us feel almost like the families of those brave astronauts as they watch the situation unfold on the news. I think the film can only really be described as an emotional roller coaster. The magic of the edit, the camerawork and the performance of the actors, helps to make us feel on edge in some moments, though hopeful in others, much like those who were in that situation probably felt at the time.

At the start of the film I think we’re made to feel joy for those that have been invited to go on the Apollo 13 mission, with the members of the team celebrating with their families and preparing equipment to broadcast their journey to the moon. However, from the point when Jim Lovell’s (Tom Hanks) son brings up the fire incident that occurred on Apollo 12, we start to feel concern for these characters, because we have doubts about the mission going well. I for one definitely did, because I hadn’t heard much about the Apollo 13 mission, so I didn’t really know how it was going to pan out. I think seeing the emotions of the astronaut’s families does a very good job of making us as viewers feel uneasy, by showing us their upset over events of the film, or of the prospect of the parent/partner going to space, and potentially dying. The performance of Kathleen Quinlan, as Marilyn Lovell, really helped us feel this way, and possibly even wonder if they did make it back (to those who know little of the real events). 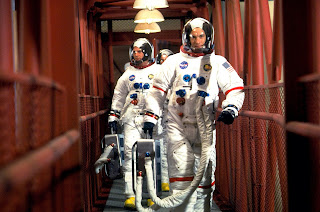 From here we continue to have doubts about the mission, especially considering that 13 is considered to be “unlucky” by some, which is brought up during one of the press interviews before the launch. And I do love how there’s a fight against the odds theme going on in this film, with some in mission control saying theirs a 3:1 chance of the astronauts making it home. Before the launch even begins, we also find out that one of the team has to be replaced by one of the backup astronauts because of a supposed illness, which then makes things a little more concerning, as Kevin Bacon's character (Jack Swigert), of the backup crew, has been in the simulators less that the others, making us wonder if he knows what he’s doing. It also creates an interesting dynamic between the characters, because it causes his fellow astronauts to have doubts about him on the mission.

Whilst there are doubts though, there are also high moments for the characters, such as when they’re having fun in space before things go wrong, with the crew playing pranks on each other, and showing their (unfortunately small) audience back on Earth, around the spacecraft. This also kind of made me feel sorry for them because we find out that no TV network cared about the Apollo 13 mission, because people had already seen “man walk on the moon”. I think that moment is very important, because the moment that they start paying attention to this space mission is when things go wrong, which shows how cruel the media can be at times. I think this Apollo mission helped the American people to realise how much any astronaut needs the people from their nation to believe in them, to give them the confidence that they can make it home.

This film is edited together exceptionally well and this is the leading reason why we feel conflicting emotions throughout the whole film. The film cuts between shots of the astronauts feeling “in the dark” about how they’re going to land safely on Earth, if they even make it back to Earth, and shots of Jim’s family, both in the positive moments, when Jim’s mum reassures her Grandkids that “if they could get a washing machine to fly, my Jimmy could land it”, and the more negative moments when the family are waiting to hear if the astronauts had died from the heat of entering the atmosphere. 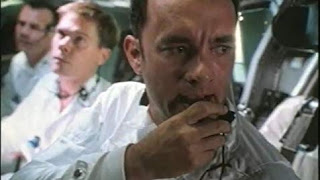 In some points during their mission we get to see more of the characters reactions to their difficult situation, in many different ways. Including how they end up passing blame around as to who’s responsible for their predicament. I think this is one of the moments when the actors really shine, because they really do give across the impression that they’re tired of being stranded in the spacecraft, and they’re stressed, because they may not make it home. There’re also moments when the characters might tear up equipment they’re wearing, to not only show us how fed up they are, but for a bit of comedic value, which helps us grow more attached to these characters.

I think from this we have to remember that this film heavily relies on the performance of it’s actors, because it’s a film of which characters are essential. Not only the characters that are in space, getting stressed over potentially being stranded in space, but the people in mission control, who are determined to find a way to “get their people home”. One performance that helped us believe that they might make it home, that inspired and encouraged the people in mission control, was the actor who plays Gene Kranz (Ed Harris). The moments when he helps by making the tough calls to get the astronauts home, and encourages “outside of the box” thinking, helps the crew of the Odyssey to feel comfortable that they may make it back, during the toughest of times.

The music in this film is also fantastic, it makes the journey to space feel almost magical with its use of notes that feel like they were torn right out of a Harry Potter film. Of course, the tone of the music switches to a more low-pitched theme during the more tense moments, and I think that helps to make the situations that the crew are put in, feel way more intense, and unnerving. Though during the moments when they’re just exploring space, the music helps us appreciate the beauty of just going to space, and when they astronauts finally make it home, we can realise that they still had the experience of going to space, and surviving against difficult odds, to remember for the rest of their lives.

In my opinion this film not only does an incredible job of telling the story of how Apollo 13 made it back home, but it also helps us feel like we’re watching the events unfold like people at the time, and that’s what makes this film particularly special. It made me realise the importance of showing support for those who accomplish something that is still an incredible achievement, especially if it's something that involves being brave enough to risk their lives to do it.