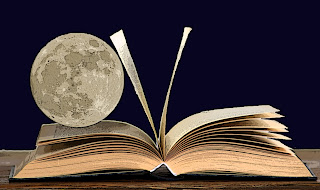 Susan Omand raids her vast bookshelves to find some of her favourite science fiction stories about the moon...

Up until 50 years ago nobody had set foot on the moon (some say they still haven’t) but that great grey ball of reflective rock in the sky has long figured as a location to set the most fantastical stories and fire the imagination. When I was wee, though, it wasn’t made of rock, it was made of cheese or maybe a giant button. It had cows jumping over it and pink knitted creatures living on it. Whenever I got scared at night the man in the moon smiled down over little me and everything was alright again.

Growing up didn’t mean that I left the moon behind in my consumption of stories either because it was then that I discovered the wonder of science fiction. The moon, in modern science fiction, became a colonised base for further astral quests as well as being one of the great uncharted territories to be explored as I, in turn, explored the classics. The creatures on the moon mostly became scarier than Clangers though and the harshness of lunar habitation became a challenge or an obstacle depending on what I read.

And boy, did I read. Science fiction was my genre of choice for a long time, as I hankered for the escapism and adventure that a completely new environment would bring. And, as space travel for the everyman comes a lot closer to reality than it ever has been, I still find myself wondering if I would go for real to the place I had travelled to many times in my imagination thanks to the wonder of stories about the moon.

Before I give you my list of top 5 stories about the moon, I have to give a special mention to 2001: A Space Odyssey as one story that didn’t quite make the list on a technicality. This is because I watched the brilliant Kubrick film before I read the, equally brilliant, Arthur C Clarke book. However, this meant that the story of the book was not conjured differently in my own imagination, as Kubrick manifested it so much better, and that’s all I could see when I read it. The book gave me extra insight into the film rather than the other way around.

Here, then, in reverse order is my top five “grown up” stories on or about the moon. 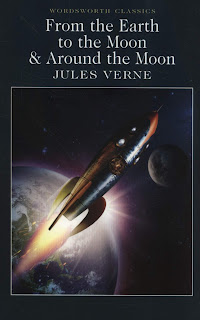 Jules Verne – From the Earth to the Moon

Tells the story of the Baltimore Gun Club, a post-American Civil War society of weapons enthusiasts, and their attempts to build an enormous Columbiad space gun and launch three people—the Gun Club's president, his Philadelphian armour-making rival, and a French poet—in a projectile with the goal of a Moon landing.

This book is important, as well as being a great read, as long as you treat it as being “of its time”. Important because it was written in 1865, over 100 years before the race to the moon was a reality and is seen by many, because of the accuracy of Verne’s calculations, given his lack of much data on which to base them, and his illusion of plausibility as actually being a factor in the real space race. It is also referred to in lots of other pop culture, both films and books, since the early 1900s, and is said to be one of the pre-cursors of modern science fiction. 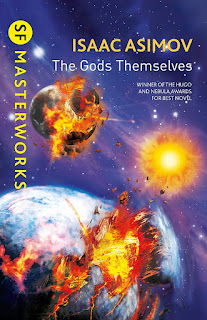 Isaac Asimov – The Gods Themselves.

In the year 2100, the invention of the Electron Pump - an apparently inexhaustible supply of free energy - has enabled humanity to devote its time and energies to more than the struggle for survival, finally breaking free of the Earth.

But the Electron Pump works by exchanging materials with a parallel universe, and such unbalancing of the cosmos has consequences. Humans and aliens alike must race to prevent a vast nuclear explosion in the heart of the Sun - and the vaporisation of the Earth exactly eight minutes later ...

Maybe lesser known than his Robot or Foundation novels, this standalone novel, written in 1972 by one of the acknowledged “big three” SF writers, is a challenge to read, given its non-linear construct but, equally, incredibly rewarding because of it as it is just so, SO far out there it requires a huge leap of faith that takes you out of time as well as out of a visual reality and I found myself really immersed in the story. 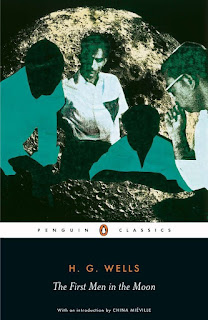 H G Wells – The First Men in the Moon

When penniless businessman Mr Bedford retreats to the Kent coast to write a play, he meets by chance the brilliant Dr Cavor, an absent-minded scientist on the brink of developing a material that blocks gravity. Cavor soon succeeds in his experiments, only to tell a stunned Bedford the invention makes possible one of the oldest dreams of humanity: a journey to the moon. With Bedford motivated by money, and Cavor by the desire for knowledge, the two embark on the expedition. But neither are prepared for what they find - a world of freezing nights, boiling days and sinister alien life, on which they may be trapped forever.

I really enjoy H G Wells’ writing, although I know that some find it quite impersonal because of its inward-looking journalistic (as in written in a journal) nature but that restraint is one of the aspects that I love. From The Time Machine to The War of the Worlds to The Island of Doctor Moreau I just revel in his turn of phrase and his sense of the fantastical and this expedition to the moon and the consequences thereof is a great example of a vivid imagination superbly controlled. 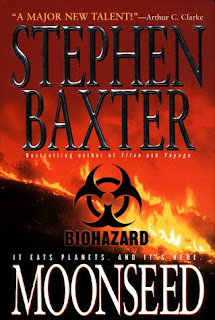 Showering Earth with radiation and bizarre particles that wipe out all the crops and half the life in the oceans.

Suddenly, the ground itself begins melting into pools of dust that grow larger every day. For what has demolished Venus, and now threatens Earth itself, is part machine, part life-form – a nano-virus, dubbed Moonseed.

Four scientists are all that stand between Moonseed and Earth’s extinction, four brilliant minds that must race to cut off the virus and save what’s left of the planet.

Stephen Baxter is the best living hard science fiction author, in my humble opinion. The whole of his NASA trilogy, of which this is part 3, is definitely worth reading (along with all his other books) but Moonseed is definitely the best of them. Be warned though, each book is a massive undertaking of time as, once you’ve started, it is difficult to stop as you get pulled in to his sense of logic and scientific research and enrapt by his concepts and ideas. 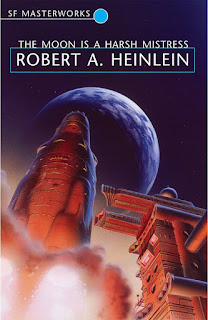 Robert Heinlein – The Moon is a Harsh Mistress

Life isn't easy for the political dissidents and convicts who live in the scattered colonies that make up lunar civilisation. Everything is regulated strictly, efficiently and cheaply by a central supercomputer, HOLMES IV.

When humble technician Mannie O'Kelly-Davis discovers that HOLMES IV has quietly achieved consciousness (and developed a sense of humour), the choice is clear: either report the problem to the authorities... or become friends.

And perhaps overthrow the government while they're at it.

Robert A Heinlein is, by far, my favourite science fiction author. I have been collecting his work ever since I first read I Will Fear No Evil (still my favourite book of his) and I could have chosen any number of his titles for this list as the moon, or Luna as he often called it, features large in a lot of his writing so this is just an example because it has Moon in the title. His work is always politically charged without being preachy, his characters well observed, his dialogue sharp and funny, and the action is always dramatic and cinematically thrilling. It’s everything you could want in science fiction and many, many more people need to know about him.