Moon Day - Houston, We Have a Problem 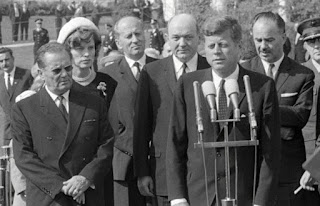 To round off our Moon Day, a reminder of the time Steve Taylor-Bryant watched a film from the London Film Festival Laugh section, back in 2016, that was actually a documentary about the Yugoslav space programme by Žiga Virc and Bostjan Virc...


The incredible story of the top-secret Yugoslav space programme that Tito sold to the USA in the 1960s for billions of dollars is hilariously revealed by debut director Žiga Virc. Skilfully combining archival footage and interviews with key figures – including a former Yugoslav aerospace engineer and an American historian as well as philosopher Slavoj Žižek – it’s a fascinating examination of Cold War foreign diplomacy and the lies, manipulation and trickery that make up national identity. Who was really responsible for America’s mission to the moon? Was Kennedy’s assassination shortly after Tito’s visit to the USA just a coincidence? Blurring the lines between fact and fiction, Virc’s hugely entertaining film uncovers one of the biggest conspiracies in human history. Or does it? Where does history end and myth begin? Is it possible to distinguish a cleverly constructed lie from reality? What does Slavoj Žižek think about it? And more importantly, what do you?

The first thing I have to say after viewing this documentary is that it shouldn’t be funny, it shouldn’t be in the laugh section of the LFF, as some parts of it are heartbreaking. However, the irony of some events and the reactions by some to what goes on is a kind of humour I admire, a black comedic sensibility if you will.

The basic story of the film is that the President of Yugoslavia, Tito, wanted to join the Russians in space. He goes and gets himself the best engineers he can and they are relatively successful in what they are doing but have no money. The Americans are trying to outdo the Russians and have loads of money but worthless technology. A secret deal is struck between President Kennedy and Tito to buy the Yugoslav Space Program covertly for 2 ½ Billion US Dollars (approximately 50 billion in today’s market). Tito pretends he wants to visit Africa and picks Morocco first then uses his diplomatic fleet of boats to discreetly transfer the technology to an American air base where they can ship it to Houston. The Yugoslavs had lied/exaggerated/fabricated (depending on which witness you believe) about the capabilities of the technology and it didn’t work. America was furious and Tito is summoned to The White House where, behind closed doors, he is told to get it working or pay back the money. Then, in his New York hotel, someone tries to assassinate Tito so he goes home.

A month later Kennedy is dead. Lyndon Johnson doesn’t let up though and sends his Secretary of State, Rusk, to Belgrade to tell Tito to get the technology working or he will topple his country. Tito and the Yugoslav People’s Army round up 26 top engineers, including Ivan Pavic, and send them quietly to America whilst faking their deaths back in their homeland. Eventually the Apollo mission is a success, despite not using any of the Yugoslav technology, and during the celebrations the Yugoslav scientists aren’t thanked. Upon their return the Apollo astronauts visit Yugoslavia whilst, in the background, the US politicians continue to demand their money back from Tito. Nixon is particularly furious as when Tito visits he keeps smoking Cuban cigars given to him directly by Castro. Nixon is so angry that he is caught on one of his infamous Oval Office tapes saying “We’ll bomb those Yugoslav bastards right out of… off the earth. I really mean it”.

Tito has no money so tells the Americans he will pay them in cars and tasks his engineers to design a grand limousine to export to the United States. They come up with the Yugo. Enough is enough and the US starts to deal directly with the regions within Yugoslavia aiming to destabilize the country. In 1980 Tito dies and 11 years later a civil war leads to the start of new countries – Slovenia, Croatia, Bosnia & Herzegovina, Serbia, Montenegro, Kosovo and FYR Macedonia will all come into existence, especially after the NATO sanctioned air strikes in 1999 where the first bombed building was the Yugo factory. 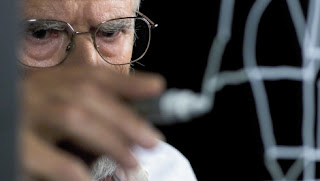 As you can see, some of what occurred seems like it could have come out of a Dr. Strangelove movie and this was certainly a part of The Cold War that we never got taught in our history studies. All the above factual information was incredibly well packaged and would have made for a half decent documentary in its own right but the filmmakers added another, more human level to it. Alongside testimony on screen from a YPA General there was the extraordinary story of Ivan Pavic, the scientist that had his death faked and was transported to the US. He starts by showing the film crew around the old bases and camps they worked from but it is when he returns to his home that the tears start to come. When his wife was told of his “death” she had been pregnant and now 50 years later Pavic is getting to meet his daughter for the first time. A lot of their meeting is awkward and sad, when she speaks of her mother I am also tearing up and I found Pavic to be not just a fascinating man but a man of true regret. In fact the only funny part of Pavic’s role in the film is when he and his daughter visit the grave of Tito and after sitting for a while in silence Pavic just shouts “Fuck Off Tito”.

This was an astonishing watch and for some parts I genuinely thought I was watching a piece of brilliant satire, however it is as historically brilliant as it was significant, with some real dark humour thrown in with the way the timeline is put together. The human elements hit every chord they are supposed to and, most importantly, I felt I genuinely learned something which is what a documentary is supposed to do.