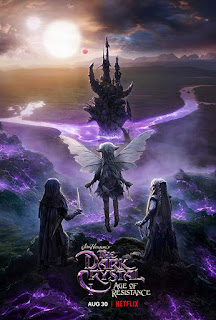 "The idea is you watch the show and you forget you're watching puppets." Watch a new Behind the Scenes featurette from The Dark Crystal: Age of Resistance...

Yes, we know, we're late to the party with this video but there's just been so much stuff coming out of SDCC that we're still catching up. However, we've got this far now and fans at San Diego Comic-Con 2019 were given a glimpse of the artistry behind the scenes of the resistance in the Dark Crystal prequel by director Louis Leterrier and executive producer Lisa Henson.

When three Gelfling discover the horrifying secret behind the Skeksis’ power, they set out on an epic journey to ignite the fires of rebellion and save their world.

Darkness rises on Netflix on August 30.