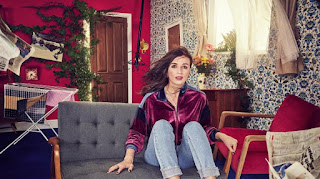 This Way Up is a new comedy drama series from Aisling Bea which looks at loneliness, happiness and mental health recovery. Find out more in this short interview with her from Channel 4...

This Way Up is written by Aisling Bea, who also stars as the charming and funny Aine, a whip smart English-as-a-foreign language (TEFL) teacher trying to pull her life back together after a “teeny little nervous breakdown", as her sister Shona, played by Sharon Horgan, worries, not only about her younger sibling, but also about her own life choices. The TEFL school where Aine teaches brings together a room full of characters also trying to find their own hope, direction and happiness in this messy world.

Through Aine’s own experiences, and the experiences of those around her, This Way Up explores how the pursuit of happiness differs for everybody and unveils the obstacles which come between that goal and the reality of a life lived. This poignant, pin-sharp comedy shows the journey to happiness is harder for some than others.

Here's the Q & A with the show's writer and star Aisling Bea, thanks to Channel 4.

Can you explain a bit about the show?

The show is technically a comedy about loneliness, but that’s kind of a hard-sell. The romance at the core of the show is the relationship between two sisters. What I wanted to do was make a show not about someone breaking down, but starting broken and going ‘this way up’ on the way to recovery. And I wanted to show how messy and hard it is to get better and remain well. And it doesn’t have to be done in a maudlin way; People get through things with humour. It’s about family, and loneliness, outsiders, immigrants, and how we all feel like outsiders at times. It starts from just after a nervous breakdown [of Aine, Aisling’s character] and about her rocky incline up to sanity.

How much research did you do into mental health and the issues surrounding it?

Errrr… a lifetime? [Laughs] In terms of research, it’s the human condition, I suppose. I’m quite philosophical, quite into self-help, and improving myself and the work we all have to do on ourselves. One thing I did research, and kept coming across a lot, was how loneliness physically effects people – how it effects their ability to get better. The idea that people die from loneliness after their partners die is a real thing. The effect it has on their body is huge. I think that’s what we’re seeing in society now is an ill society from loneliness. I researched that a lot. But a lot of writers are story collectors, and that’s what I did a lot of.

So I would collect lonely stories - I’m not sure if you’d call that research exactly, but it’s plucking stories from life. I talked to all sorts of people. Doing stand-up helps – you meet such a wide variety of people. It was an accumulation of stories rather than research.

Did it worry you, taking on such an emotive issue? Were you constantly worrying about treating it sensitively?

It’s not coming from a place of inexperience and I’m not doing it because it’s a ‘hot topic’. You know how, if you’re a freelancer, you keep all of your receipts for your accountant? I always ask myself: “Could I justify that expense in a court of law? Yep, that tea was for work.” And on other days I’m like “I can’t justify that taxi. I know I was going in to town to see a friend.” I suppose with this, I don’t feel there’s anything I couldn’t justify. There’s nothing in there that I’ve thrown in without properly thinking it through. I’ve really tried to get this right – I may not have always succeeded, but I’ve tried really hard. Nothing is in there with irreverence, but a lot is in there with humour, I hope. 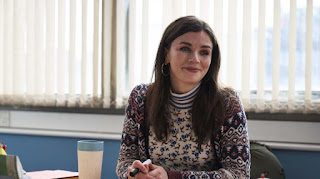 Why did you decide to make Aine a TEFL teacher?

I come from a family of teachers, a lot of my aunties were teachers. Even my mother, who’s a retired jockey, is a teacher. Even she teaches jockeys. I like the idea that Aine’s good at it. It’s not a show where it’s a woman in her 30s who’s trying to find what she can do, and suddenly discovers she actually wants to be a writer or whatever. She doesn’t have other dreams; She loves teaching. Maybe it’s a bit of a love letter to teachers. And I’m acutely aware of how privileged I am, as an immigrant to this country, to have English as my first language, and I wanted to show the other side of that. Some of these characters just don’t have the words to actually be who they were back in their own countries. That’s so isolating not to have the language. There’s a woman I know, for example, who’s so lovey, but she doesn’t speak much English, and she puts everything into Google Translate, and I just think we’d be much better friends in other circumstances, but the language gap is so huge between us.

Aine’s ‘thing’ is being funny. I get the impression that she sometimes can’t stop it…

[Laughs] Yeah, I wonder where that comes from..! It’s her diesel. It’s her interest. I definitely have that. Like my favourite thing when waiters come over is, I like to see if they’ve got a bit of craic in them. And it is very annoying for the people I’m with. It’s really bad dad jokes. Like I’ll say “And the gentleman will have…” even though it’s a lady. I was born to be a father, who makes terrible jokes. I cannot wait to be a father, so I can finally have a vehicle for all of my shitty jokes. But I don’t think her humour is one of those things that gets her into trouble. I think it’s the thing that gets her out of it. People find her funny. I like seeing the world through funny people’s eyes. Most of the people I know are very funny, so I suppose I wanted to reflect that. But also there’s an aspect of humour that allows you to explore a subject with a lighter touch. I talked recently with someone from the mental health charity Mind, and she told me that often, in cases of suicide, people will say “Oh, I had no idea he was so unhappy, he was so funny!” I think those things aren’t the opposite to each other, they can sit side by side. I think most people use humour to try and get through hard times.

Sharon Horgan plays your sister in this – you’re very close friends in real life, and you’ve actually played sisters before, haven’t you?

Yeah, our first ever thing we did together was called Life Stories, it was a pilot for a show that ended up being called Dead Boss. And that pilot became a TV show a year later. We had an immediate connection, and then just started writing a film together. I look up to her in a big sisterly way. I’m a massive fan of her. I do have an absolute want to make her laugh. It’s so rewarding, she’s got this dirty, fry-up laugh. And she laughs very freely, she loves funny people, so she really lets out her big old laugh. So I find myself trying to get a laugh out of her, thinking “What’ll I do? What’ll I do? Will I wear this as a hat?” That’s very much the dynamic I have with Sharon, which isn’t the one I have with my actual sister. 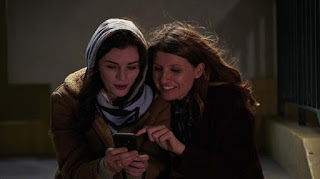 Speaking of which, your own sister, Sinéad O’Sullivan Kidao, was the costume designer on the show. What was that like?

Yeah she was! This is a step down for her. She came off doing the new Greta Gerwig movie, Little Women. We have our text messages which are like: “Did you ring mammy today?” And then we have another message “group” strictly for costume chat, and it’s just the two of us, me and Sinéad again, but that one is for work. So one is for work, the other for sisters. And we’ve had to draw the line. So sometimes I’d message her about a costume, and she’d go “Yeah. By the way, did you read Auntie Bernie’s email?” And I’d go “Wrong group.”

Presumably you have an element of that with Sharon as well, because it’s made by her production company Merman and she’s an exec producer. Is there an element of friendship coming into conflict with the professional side of things?

I don’t think conflict, because I have to say we are all professionals. And we’re all very respectful of each other. So if Sharon has notes for me, she might say “Is it alright if a change that?” In the same way, I wouldn’t just throw my costume on the floor and go “Sinéad’ll pick it up.” But obviously I will do that at home! [Laughs] And Sinéad is extremely professional herself. That professionalism is there on purpose, to help negotiate those moments. I wouldn’t have wanted to do this with Sharon and Sinéad if that wasn’t established. I have the same thing with one of my best friends Brona (C.Titley) she works with me on a number of panel shows and different things, she’s my head writer on 8 Out of 10 Cats, and I wouldn’t have asked her to do that if we didn’t have a system in place. There’s a line in place, and that protects all of us.

How do you feel about the end product?

It’s a lovely feeling, and on behalf of the team I’m really proud of it and everyone who worked tirelessly on it. And I was proud of the workplace we had, the environment with the crew and on the set. Loads of people have made pals out if it, and it’s a group of people I’d love to work with again. That’s the best thing. I’ve had to separate myself from “Do people like it?” Because that way lies great pain. With other things, for example I have no control over the edits of panel shows, I have no control over edits of other TV shows I’m in. But with this, we’ve really crafted this all together. I’d have loved every episode to have been a few minutes longer, so I could have fitted more stuff in and didn’t have to lose lots of bits I loved. So I’m not saying it’s perfect, but I’m proud, knowing all the circumstances of what I’ve made. I don’t think I’ve had that in my career before, it’s a long time to go to be proud of something like that. I feel proud of everyone in it, and everyone who worked on it.

This Way Up starts on 8th August at 10pm on Channel 4. The entire series will be available to stream on All 4 after the first episode, with the show continuing weekly on Channel 4.