Birthday Takeover - Murder in the First 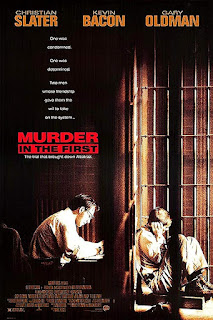 Probably as a result of his pre-Birthday bash, Steve Taylor-Bryant pleads... sorry, watches Murder in the First...

Henri Young stole five dollars from a post office and ended up going to prison - to the most famous, or infamous, prison of them all: Alcatraz. He tried to escape, failed, and spent three years and two months in solitary confinement - in a dungeon, with no light, no heat and no toilet. Milton Glenn, the assistant warden, who was given free reign by his duty-shirking superior, was responsible for Young's treatment. Glenn even took a straight razor and hobbled Young for life. After three years and two months, Young was taken out of solitary confinement and put with the rest of the prisoners. Almost immediately, Young took a spoon and stabbed a fellow prisoner in the neck, killing him. Now, Young is on trial for murder, and if he's convicted, he'll go to the gas chamber. An eager and idealistic young attorney, James Stamphill, is given this impossible case, and argues before a shocked courtroom that Young had a co-conspirator. The true murderer, he says, was Alcatraz.

There was a period of time in the 1990’s where Christian Slater was the biggest star in the world and failed at nothing. Even some of the films that maybe weren’t successful weren’t Slater’s fault, from Young Guns II: Blaze of Glory in 1990, Pump up the Volume in ’90, Robin Hood: Prince of Thieves and Mobsters in 1991, Kuffs in 1992, Untamed Heart and the glorious True Romance in 1993, Jimmy Hollywood and Interview with the Vampire: The Vampire Chronicles in 1994 we then find ourselves in 1995 Murder in the First and top billing, above Kevin Bacon and Gary Oldman and probably the best (or joint best with True Romance) film of this period, the last great movie before Broken Arrow seemed to tip the balance and send Slater into a huge slump that didn’t really lift until Mr. Robot twenty years later.

In Murder in the First Slater plays James Stamphill, a relatively inexperienced but idealistic lawyer who at first didn’t seem to understand the case he was being assigned by the public defender’s office for which he worked. The case was one of an Alcatraz prisoner, no 244 Henri Young (Kevin Bacon), who stabbed a fellow inmate in the neck in front of 200 witnesses. I too, would feel somewhat punished if that was assigned to me, it’s a slam dunk for the prosecutor, there’s no way you win, and your client gets the gas chamber. Except for Stamphill, as he tries to get to know this mentally damaged client, discovers how Henri became the way he is and uses the brutal mistreatment of inmates at Alcatraz by Deputy Warden Milton Glenn (Gary Oldman). Young had been kept in solitary confinement for three years and two months, with an occasional half an hour outside at Christmas. The guidelines for solitary confinement were 19 days, and for good reason, even back in the 1930’s and 1940’s people knew how psychologically bad confinement and torture was, and so Stamphill bases his defence of Young on that mistreatment, that Alcatraz and its torturous ways instilled in everyone by Glenn, turned Young into a weapon. 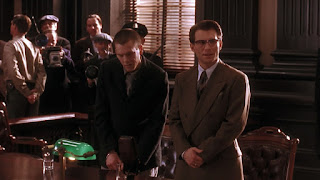 Before I get to some great performances and to my thoughts on the film in general I do want to point out that if you have any interest in Alcatraz, or have studied it in anyway, then you will see immediately that the filmmakers have taken great artistic license with the story of Henri Young. The real Henri Young did indeed as stated in the film try and escape with Rufus McCain in 1938, and he did indeed stab McCain upon his release from three years in solitary. He didn’t however end up at Alcatraz for stealing $5 to feed his starving sister, he was moved to Alcatraz to fill one of the expensive cells, sure, but he was already serving time for murder. He also didn’t die heroically after the trial like the film will have you believe; he was moved to various institutions over the next few years and actually escaped in the 1970’s to never be heard of again. However, the brutality he faced in Alcatraz is a story that needed to be told, and the trial did indeed pretty much happen as it did on screen, I suppose the filmmakers needed to make Young seem more sympathetic to make the point of the story land harder on an audience, I just thought it was a shame the original facts of Young were bastardised as they were. This is probably why I am not a filmmaker, and whilst this seems like a rant, it really isn’t, it’s a slight quibble that I have maybe given too many column inches to.

My factual quibbles aside, writer Dan Gordon pulled off an extraordinary multi-faceted tale. He wrote a great Alcatraz film, he wrote a great courtroom drama, but he also wrote a stunning portrayal of a relationship between two men that in any other scenario wouldn’t have known each other let alone become unlikely friends, and his script gave Slater and Bacon room to show what truly great actors they really are. Bacon in particular was astonishing as Henri Young, he gave a performance that to this day I still hold the Academy in contempt for not recognising with at least an Oscar nomination. He played the tortured and psychologically affected Young in a way that you couldn’t help but root for him, from the initial beating, not shown on screen just verbally portrayed under the opening credits, through the visual torture at the hands of Gary Oldman, to the physical and verbal ticks that years of abuse left him with. How he was not recognised for top awards is beyond me, and I hope before his career is over, he gets some kind of apology from the Academy for this massive oversight. Oldman was exactly what you want Oldman to me. Menacing in his silent moments, over the top aggressive in his loud moments and the scene with him being harassed in the courtroom by Stamphill had a real A Few Good Men feel to it. To play against menace, and to play against one of cinemas great performances you need someone to ground the whole thing and that is Slater’s job here. Slater showed moments of brilliance with his verbal tirades, or facial expressions during the courtroom scenes but showed great restraint and backed off anything that would make him shine in great periods of the film, allowing others to take a spotlight which I would imagine is quite difficult in a trade of egotism. His scenes with Bacon were full of heart, you really buy their blossoming friendship, you believe Slater when he says he wants to help, and scenes outside the courtroom talking baseball, playing cards, or reading the news together were quite beautiful to watch and a respite from the tension of the case. Having R. Lee Ermey as the Judge was a genius piece of casting, he instantly exudes authority but towards the end when Stamphill wants to question his own client to ram home the point about Alcatraz the little to and fro between Slater and Ermey is witty and yet in keeping with the seriousness of the situation.

We don’t seem to have great courtroom dramas anymore, I don’t know why that is, maybe they aren’t fashionable or perhaps all the good cases have been done, but we used to have many and I would put Murder in the First up there with any of them. It doesn’t feel as dated as maybe other films made nearly three decades ago, it still feels as emotionally raw and powerful on this watch as it did on my first, and I am still as angry that the cast weren’t recognised with awards today as I was then. Great stories intertwined with a smidgen of truth, portrayed masterfully.