Comic - Return to the Asylum 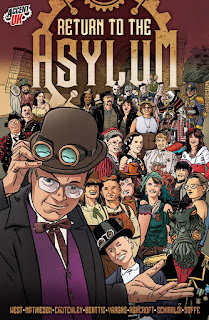 With just over two weeks to go on its crowdfunder, Susan Omand finds out more about the steampunk comics anthology Return to the Asylum from AccentUK...

Yes, I'm sorry, I'm a fan of steampunk. No, in fact, I'm NOT sorry; the era of Victorian science fiction and engineering ingenuity and the brilliance of future tech designed with steam driven limitations has always fascinated me, so I was interested to see what Return to the Asylum would contain when this was the synopsis offered:

Return to the Asylum is an Anthology of seven short steampunk/cyberpunk stories which take some of the 'Asylum Steampunk Festival' assistants as protagonists.

"What's the Asylum Steampunk Festival?" I hear you ask.  Apparently it's "the largest and longest running steampunk festival in the Solar System," well, Lincoln anyway, "attracting participants from around the globe," with the most recent event, now in its 11th year, taking place last weekend, and the costumes and characters from previous similar events have formed the inspiration for the comics in this anthology.   You can find out more about the Festival here.

Intrigued, I had a quick look at the finished anthology and I must say the creativity and ingenuity in each story is superb. 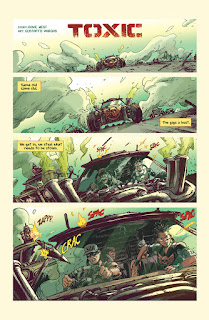 Toxic - Story by Dave West, Art by Gustavo Vargas - looking like Tank Girl vs Mad Max and, putting the code of honour among thieves to the test, this story features the post apocalyptic band V2A.

Thirsty - Story and Art by Gary Crutchley, Colour by Matt Soffe - a samurai walks into a pirate's bar somewhere in the wild west (although it reminded me of Edinburgh Grassmarket) with added "poink."

A Brief Encounter - Story by Colin Mathieson, Art by Anna Francesca Schiraldi - and a look at the job of a Licensed Elemental Conservationist. 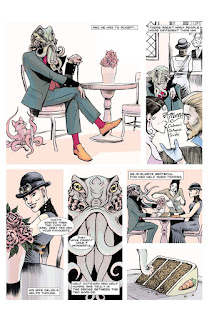 Lord Squid - Story by Dave West, Art by Ian Ashcroft - this has to be my favourite looking comic in the anthology, the art is magnificent, and it's not just because of Squidepuss, although "awwww," and we are introduced to Lord Squid on one of his fleeting visits to Earth from Octavia

Heart's Desire - Story and Art by Colin Mathieson, Colour by Matt Soffe - has the subtitle "inspired by a truly lovely moment at Asylum X" and travels from space, to Morocco, to... Lincoln Castle?

Slow News Day - Story by Jemma West, Art by Dave West - we follow "Intrepid Journalist" Rufus Trimble as he goes about his day, looking for the next big story. And finally... 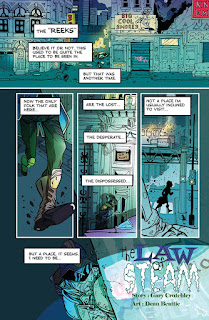 The Law of Steam - Story by Gary Crutchley, Art by Dean Beattie - sees a detective noir story the like of which you'll never have read, with a very nice tie-back into one of the previous tales if you're sharp eyed.

So that's what's in the book, so what can you get for pre-ordering it through this Kickstarter? Well, yes, you get the anthology, in digital and print format, which you can also get signed by the band V2A, and you can also catch-up with the original anthology from last year called "Enter the Asylum." But there's also the opportunity to pick up original comic page artwork from Gustavo Tataje (Toxic) and Ian Ashcroft (Lord Squid) or, if you prefer, there's Alt-history comics on offer where Brunel and Stephenson have to build a robot army for Queen Victoria!

But the main reason to back the anthology is to get the anthology. It's definitely worth a read. Watch the crowdfunding trailer below then support your local Steampunk Asylum...