It's August and, for us, that can mean only one thing... The Fantasy Football is back and The DreamCage Challenge Cup is now OPEN for entries. Susan Omand explains more...

YES! We're back for another year of Fantasy Football Fun, where we all take it far too seriously, spending ages trying to buy enough players of any quality to fill the squad because we've already bought Aubameyang and Agüero, worry about the fact we need 4 players from the same team because of the transfer window but can't get them and filling out spreadsheets to work out the probability of Harry Kane scoring before September so... oh, that's just me? This might be where I'm going wrong then. However I did manage to beat our great and glorious leader Steve last year by a whole 2 points (although I have conveniently lost the screenshot to prove it) even though we were both WAAAAAAY behind the league winner, whose immense lead right from the start and eventual score of 2396 points meant that he could have had his prize as a Christmas present rather than waiting til May. 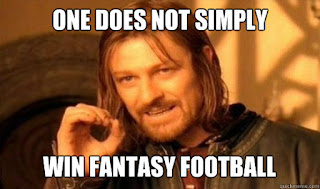 Talking of PRIZES, as usual we're opening the league up to you too. The overall winner of the League at the end of the season will get a very nice prize - an actual Cup! Well, a mug really, which is bigger than a cup and therefore better. (Our excuse and we're sticking to it.)

Below is the league code if you want to join in the fun.  We're using the official Fantasy Premier League site at http://fantasy.premierleague.com/ and you will need to log in or register and set up your team before you can join the league.  If you were in the league last year and set up a team this year again, you should be automatically added, but if you're new to all this then you'll need the code below to make sure you're taking part (the letters are in lower case):

The DreamCage Challenge Cup league will be closed off on Friday 9th August at 18:00 BST (the first Gameweek deadline is the same day at 19:00 remember - it's a Friday night 8pm kick-off for the Liverpool v Norwich game - and you'll need time to sort your team) and only people who have joined our league before that cut off time will be eligible for our competition. The prize will be sent out at the end of the  season to the winner.