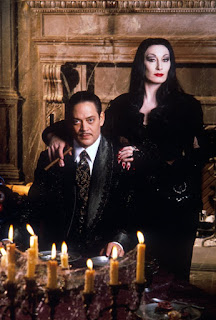 A reminder of Susan Omand's thoughts from a few years back on the creepy and the kooky, mysterious and spooky, the altogether ooky definitive film from 1991 ...

In all of Nate McKenzie’s list of Christmas films, he forgot to mention this one! What do you mean it’s not a festive film? It must be - it opens with carol singing for goodness sake. Closely followed by a slightly disturbing look at a little wooden Morticia Addams doll getting her cleavage kissed by a little wooden Gomez doll as the "cuckoo" on the clock, but that’s beside the point (literally).

For those of you out there that don’t know about the family there’s Mrs & Mrs Addams, their children Wednesday and Pugsley, Grandmama, Lurch the butler, the somewhat hirsute Cousin It (who only gets a brief appearance in this film) and Thing, a disembodied hand that roams the house like a pet. The plot of this film centres around a plan by the Addams’ lawyer conspiring with a loan shark, Abigail, to whom he owes a lot of money, to swindle the family out of their fortune by pretending that Abigail’s son Gordon is Mr Addams’ long lost brother Fester, returned once more to the bosom of the family. As always in these kind of films though, things never go quite to plan.

The casting of Raul Julia and Anjelica Huston as Mr and Mrs was utterly inspired as they out-eyebrow-act each other sublimely and the chemistry they have on screen is electric. It really is difficult now to imagine anyone else in these roles for a film version, something which will now sadly never happen after the sudden death of Raul Julia, although it was tried much less successfully with Tim Curry and Daryl Hannah in 1998 in a film meant to be the pilot of a new TV series. The original Charles Addams (hence the name I guess) comics were originally adapted into a TV version in the 1960’s, which was far more successful, with Carolyn Jones as Morticia and John Astin as Gomez. Yes, he’s Sean “Mikey/ Samwise/ Raphael” Astin’s father, in case you didn’t know that. This 1991 adaptation though is now more than 25 years old and probably ripe for another remake.

Anyway, back to the film. As for the other cast members, superb work from the indomitable Christopher Lloyd as he plays Uncle Fester/George the con artist with so much heart that you can’t take him seriously as a bad guy. The other stand out performance for me is Christina Ricci, just starting off her career of playing Christina Ricci in everything she does – much like Helena Bonham Carter did. Which is slightly ironic as this was rumoured for a while to be a Tim Burton vehicle although I think, if it had been, it would have ended up an entirely different film.

As it stands though, let’s face it, this is a film just for the fun of it and it’s not pretending to be anything else. Who cares if the CGI on Thing now looks a bit ropey and they feel they have to explain the whole plot again in the last five minutes. It’s the kind of film you can stick on in the afternoon and know you will be entertained but not emotionally or intellectually taxed. And at this time of year, when everyone is so stressed about holidays, family feuds and enforced socialising, that’s really all anyone can ask.