Film - The Day Shall Come 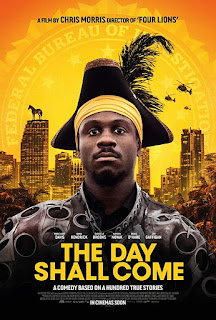 "Prepare ye, for the day that approaches is the day of the great revolution!" Coming to UK cinemas in October, watch the trailer for The Day Shall Come...

An impoverished preacher who brings hope to the Miami projects is offered cash to save his family from eviction. He has no idea his sponsor works for the FBI who plan to turn him into a criminal by fuelling his madcap revolutionary dreams.

Billed as "an emotionally gripping, laugh out loud thriller" that exposes the dark farce at the heart of the homeland security project: It is harder to catch a real terrorist than it is to manufacture your own, eOne release the film in UK cinemas October 11th.