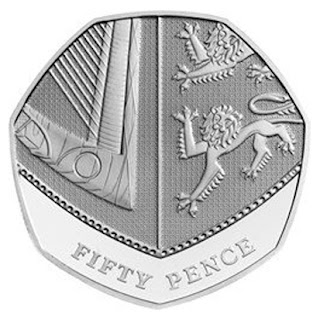 Should we ignore someone's creative work because of their personal opinions? How much do today's values affect our perception of the past? Alwyn Ash asks the questions in Royal Mint vs Enid Blyton: Right Or Wrong?...

Unless you have been hiding on Treasure Island for the past week, you will be aware of the argument that has erupted due to the Royal Mint deciding against commemorating the 50th anniversary of Enid Blyton's death by refusing to add her likeness on a 50p coin. The decision has met with criticism and accusations. The reason? In their own words, she was "known to have been a racist, sexist, homophobe and not a very well-regarded writer". This has come to light after The Mail on Sunday newspaper obtained Minutes of the committee’s meeting under the Freedom of Information Act.

While many have praised the decision by the Royal Mint, others including journalist and television presenter Richard Madeley have voiced their disappointment. Speaking to Good Morning Britain co-host Charlotte Hawkins, he said "It seems to me that if you were to draw a line in the year, say 1955, and go backwards from there you could pretty much pick up anybody based on our modern values". He also praised characters such as George in The Famous Five, adding, "These were strong girls, very very strong girls".

We do now live in a world of awakening, where eyes are opening and what was once classed "acceptable" is now being called out. The problem is, how far do we go to airbrush out everything we deem wrong and unacceptable in a modern age? Many years ago I watched Michael Anderson's WWII classic The Dam Busters (1955), a film focusing on Operation Chastise and 617 Squadron's attack on dams in Nazi Germany using Barnes Wallis's bouncing bomb. It either never occurred to me during that viewing or I saw a censored version of the movie, but a black Labrador belonging to RAF Wing Commander Guy Gibson had been given a name that would now make me feel uncomfortable. It has recently been announced that a remake of The Dam Busters is a possibility, with some asking whether the dog's name will be changed.

My view on this is that political correctness should not be there to re-write history, if we take what we like and erase everything else - or change it so that it's barely recognisable from truth - then we're in danger of ridiculous censorship.

History exists, both good and bad. As long as we identify that there are problems with some of it, then that is a huge step forward! There has also been a lot of talk lately about whether we should separate the art from the person, celebrate the work without it being tarnished by how we feel about the artist. But I guess it's all perspective.

As a child I regularly listened to a full-cast LP of The Famous Five (Five Go Adventuring Again released on the Super Tempo label in 1983) and enjoyed it very much; it helped fill much loneliness and introduced me to audiobooks. So, of course, I have a soft spot for Blyton's Five. Newer editions of the author's work had been revised and altered a little to bring its "dated language" firmly into the 21st-century, though many have questioned that decision.

Does saying "but they were a product of their time" make everything right? Should we reject anything from the past that doesn't fit into our neat little modern box? The positive that we can take from all of this is that people are talking about it instead of avoiding the subject, I've read articles and heard opinions from both sides, and it's opened my mind further.