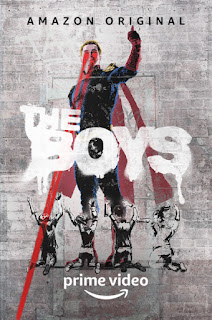 Kraig Taylor-Bryant watched a different kind of superhero show and caught up with Season 1 of The Boys...

What if Superheroes were never “chosen”? What if, in a hero’s backstory, they never really fell into a well, or escaped an alien planet? What if all of this was made to be a fiction, within their universes, to make people idolise them, and cover up who they really are? Now those are questions I never thought I needed answering until I came across the prime original The Boys, a show based on the comic book series by Garth Ennis and Darick Robertson, that Warner Brothers were on board with but couldn’t risk shaking the foundations of their lovable DC heroes. It’s understandable though, which is likely why the writer creates his own heroes, ones that seem to purposely imitate DC heroes, without being exactly the same.

Anyway, The Boys is about a gang of anti-heroes who were all victims of a corrupt organisation that advertises and houses a group of world-famous Superheroes, known as The Seven. The organisation covers its tracks, allowing its “heroes” to do as they wish, presumably fearing what might happen to them if they don’t. Heroes like A-Train (Jessie Usher) whom you might call a speedster, who accidentally runs through Robin (Jess Salgueiro), the girlfriend of the average and nerdy Hughie (Jack Quaid,) is a prime example of what heroes are capable of behind the scenes. Hughie, during the process of his grief, is approached by Billy Butcher (Karl Urban,) a Brit with a dark past and a bone to pick with the leader of The Seven for sexually abusing his wife. And then he eventually comes to meet Frenchie (Tomer Capon) and Mothers Milk (Laz Alonso), characters that often butt heads, but despite this, they must come together if they are to take down The Seven.

The story starts during a time when The Boys aren’t really together anymore, because of an incident involving one of their former partners, that resulted in innocent people’s deaths. It serves as a very clever way to introduce us to the characters, when Billy revisits each of them following the event, and we get to learn a lot more about the characters, before they really get to work. It also cleverly alternates its focus between The Boys and up and coming Superhero, Starlight (Erin Moriarty), who uncovers the truth about The Seven the hard way and letting us see for ourselves how truly disgusting human beings, these “Superheroes” are.

It’s a clever way of showing a darker side to the Superhero genre, by showing us both the kind, heroic looking heroes on one side, and on the other, what seems to be a gang of thugs that are hell bent on taking them down. It helps in making the audience understand what the general public sees in these “heroes” and antiheroes. Fortunately, the story shows us what’s going on behind the scenes of The Seven headquarters, so we know what they’re really like. Throughout different episodes though, there are also social media livestreams and news broadcasts of the Superheroes doing seemingly heroic things, to help us understand the public’s view of them.

I think the show, in a way, also gives us its own interpretation of what some celebrities can be like when you meet them in person; that the person you see on screen, or in a magazine, may not be the person that they really are. It’s almost like the writers are trying to tell us what people who seek the spotlight may be like in reality. I think at the same time that shows us why heroes in typical superhero films don’t intend to be all over the news most of the time, because they’re meant to be honourable, and not out for the glory. It all seems to be following a theme of “never meet your heroes”, or never meet your Superheroes in this case, and I’ve come to find that, in more grounded superhero films, we are more likely to relate to better in the way that we may grow to care about them more, by seeing a part of ourselves in them. 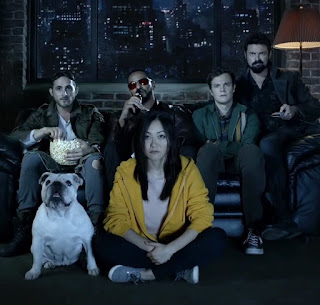 The Boys takes a sort of mocking stance to the Superhero genre in other ways too, with characters who are originally called The Female (Karen Fukuhara), which seems to be mocking typical Superhero groups who only comprise of one girl, and another being the character of Mothers Milk, that seems to be a name based on the characters race, and again, you tend to only see one of the them in a typical superhero team. But I think that’s what you can’t help but love about this show, the fact that it seems to keep that mocking style, that intends to spread awareness to people about such subjects, but at the same time, there’s a twist to it, and makes The Female heroes strong as well, almost like they’re having to fight the sexism of the superhero genre.

The issues of sexism are one of the things that make this series seem relatable, because obviously we all know how even to this day, women are underpaid in comparison to men, and the character of Starlight is continually fighting against her own place of work, purely for the right to choose how she dresses.

The show also feels grounded because of how difficult the antagonists are to take down, because obviously The Seven, have a tremendously large social media following to fight against, meaning The Boys have to fight from the shadows, being as discreet as they can be, when getting information out of the enemy.

Alternatively the show can be entirely unrelatable at some points, with its moments of sheer ridiculousness, and gruesome deaths, caused by the most ridiculous things. This is probably the only show you will have seen where a man holds a baby up to someone, using the baby’s Superhero laser eyes as a weapon. However I think that’s one of the things that makes this show stand out, and it works well alongside the more adult-orientated movies/shows of the Superhero genre, such as The Punisher and Kick Ass.

I think The Boys is definitely worth giving a try, especially if you’re a fan of the DC franchise and are okay with having it poked fun at for a good laugh. The ridiculous moments make things interesting for a wide audience and the interesting dialogue and dynamic between characters help to make all the characters interesting and even morally questionable (with the exception of the Superhero Starlight).  The Prime series definitely does its best to keep to the concepts of the characters in the source material comic series, keeping the origin stories more or less the same, whilst adding a more modernised setting and somewhat new “Superheroes”. Whilst there are some characters from the comics that we haven't seen so far in the TV series, I would hope to see them make an appearance in the second season, which has already begun filming.

Overall I think both The Boys comic and the show do a very good job of conveying the darker side of heroes that were never “chosen” by a higher power and making the darker side of the city seem more like the victims of those “heroes” that many others idolise. If you’re looking for a crazy comedy, or a more grounded Superhero series, then The Boys is for you.