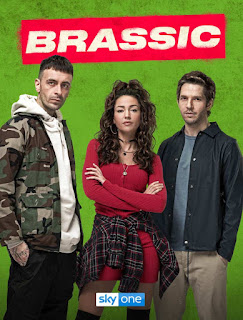 They call them Blair’s forgotten youth. Kids who grew up in a town that offered no opportunities, no prospects, no hope. But what they don’t understand is that they’re not victims – they just have a different way of living. It’s about having your mates, having a laugh, and finding a way to win at life. Vinnie, a Lancashire lad with bipolar disorder, Dylan, his razor-smart best mate, and their gang have had all the laughs. They have dealt, scammed, bribed and conned their way through adolescence. But now, things are catching up with them and a whole load of trouble is heading their way.

Brassic, the name itself says a lot. Anyone who knows enough about cockney rhyming slang is already nodding their heads and saying “Yes, I get what this show is about”. For those out of the know, and not willing to use a popular search engine of choice, Brassic means skint, penniless, without cash of any variety. So, as I said, the show rings with the title alone. Brassic is about the working class who, despite most of their ridiculous efforts, are without cash.

Brassic is a new show on SkyTV and frankly, it’s confused the hell out of me. Not so much because it exists, that actually makes sense, but instead that it’s on Sky. I’ll be upfront and say this sort of show is something I’d expect to see on original BBC Three, it’s an out-there quirky comedy with underlying heart. The entire premise is pretty simple; four main fellas trying to make a life for themselves while life itself gets into them. The end result is a mixture of oddball comedy and surprisingly heartfelt emotions. Sure, you giggle while an old man uses his bulk purchase of “Just for Men” to change a horses colour from blonde to brown, but you also have these sudden moments where you are not just laughing at a bunch of idiots fumbling from plot to plot… You begin to see actual characters unfolding, events begin to mean something. Hot damn there is even an over-arching story. Again, I am very surprised to find this on Sky but pleasantly so. Like finding a free doughnut at work, sweet delicious confusion. 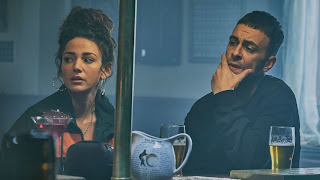 But what about the talent? Sure the premise is entertaining, and I do laugh a lot while watching it, but the talent needs to carry a show like this. If you are “in the know” you may recognise the cast, a lot of soap stars and TV misfit actors, in fact Joe Gilgun was literally from the E4 show Misfits. Despite the talent seeming like it could be a tad watered down, everything seems to work rather well. The characters feel genuine, I’ve never reached out to find the biography of Damien Molony or any of the cast but I can imagine him being a bit of a back room poker player. I can imagine Joe Gilgun being a bipolar unhinged heartfelt maniac. That down to earth feel just works on a solid foundation level.

It's dangerous to write much more about the show, there is plenty to love but the best parts are left to be uncovered. The comedy styles relies on the ludicrous becoming reality with the occasional need for shock value. If I share with you some of the better bits I’d be ruining it for you. Take my word for it when I say you’ll look back on the episodes and kinda ask yourself how things ended up the way they did, but glad you were around to watch it.

Overall, Brassic is an oddball comedy with a golden vein of compassion. It’s a binge-watchable series that will encourage people like me into thinking Sky are willing to take risks a bit more often. I just hope this isn’t a one off…

All episodes of Sky original comedy drama Brassic will be available to watch from 22nd August on Sky One and streaming service NOW TV.