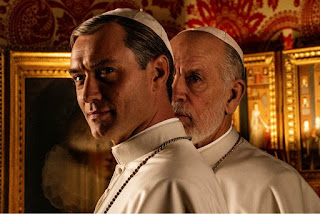 Jude Law is back in (or, rather, out of) papal vestments as the first official trailer for The New Pope has been unveiled by Sky ahead of the limited series being screened on Sunday at the Venice Film Festival...

The New Pope, written by Paolo Sorrentino, with Umberto Contarello and Stefano Bises, marks Sorrentino’s second limited series set in the world of the modern papacy, the first being The Young Pope which was shown in 2016.

All nine episodes of the new series, another co-production between Sky, HBO and Canal+, are also directed by Sorrentino and the cast again features two-time Academy Award® nominees Jude Law as Lennie Belardo (aka Pius XIII) however he is joined this time by the "New Pope" of the title, Giovanni Paolo III played by John Malkovich.

Returning cast from The Young Pope include Silvio Orlando as Cardinal Angelo Voiello, Camerlengo and Cardinal Secretary of State; Javier Cámara as Cardinal Bernardo Gutierrez, Master of Ceremonies of the Holy See; Cécile de France as Sofia, in charge of marketing for the Holy See; Ludivine Sagnier as Esther, the wife of a member of the Pontifical Swiss Guard; and Maurizio Lombardi as Cardinal Mario Assente. New cast for the new series include Henry Goodman, Ulrich Thomsen, Mark Ivanir, Yuliya Snigir and Massimo Ghini. And guest stars in the new series are set to include Sharon Stone and Marilyn Manson. Yes, really.

Anyway, let the new trailer lead you into temptation...


The New Pope is produced by Lorenzo Mieli and Mario Gianani for Wildside, which is part of the Fremantle family of producers, and co-produced by Haut et Court TV and The Mediapro Studio. Fremantle is the global distributor for The New Pope.