Cartoon - Spider-Ham: Caught in a Ham 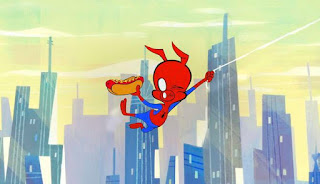 Get your bowl of far-too-sugary cereal ready and settle down like you did when you were a kid to watch a Saturday morning cartoon as Marvel has shared a Spider-Ham short on YouTube...

What do you mean "Who's Spider-Ham?" Obvs you haven't yet met the wonderful Peter Porker from the animated Spider-Man film Into the Spider-verse yet, voiced by the very funny John Mulaney.

But, instead of serious state of the art graphic technology, this cartoon sparks all sorts of nostalgia as it goes back to the animation style of the old Tom and Jerry/Bugs Bunny cartoons, even including the era specific title cards!

It’s another normal day for Peter Porker, a.k.a. the Spectacular Spider-Ham, fighting bad guys and loving hot dogs, until a mysterious portal starts messing with the very fabric of his cartoon reality!

SPIDER-HAM: CAUGHT IN A HAM - Directed by Miguel Jiron, Produced by David Schulenburg