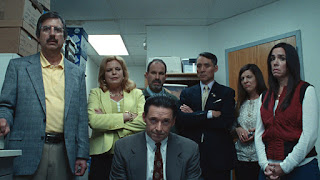 Bad Education, Corey Finley’s follow-up to his dark comedy/thriller Thoroughbreds, is another psychological examination of questionable morality, but this time based on the true story of the largest public-school finance scandal in history, in which administrators in the Roslyn school district were convicted of fraud and embezzlement.

Finley’s film opens as Superintendent Frank Tassone (Hugh Jackman) and his Assistant Superintendent Pam Gluckin (Allison Janney) are celebrating a successful year. Tassone has been so effective as administrator, schmoozing to improve his school, that local realtors dote upon him because people are wanting to move to the district, which in turn means the price of houses goes up.

Everyone appears to love and appreciate Tassone and Gluckin, whose work is praised by the school board president Bob (Ray Romano), and admired by parents and staff alike. The students at the school do well - substantial numbers of its seniors have gained places at Ivy League colleges.

Tassone has been successful in moving the school up in the national rankings and financial success has allowed them to break ground on an exciting new construction project called ‘Skywalk’. Tassone and the school board hope this might bring them top ranking.

Superintendent Tassone seems to have real devotion to his work - dutifully attending conferences, always ready to listen to the sometimes unrealistic demands of parents, and invariably offering encouraging and inspirational advice to students, each of whom he knows by name.

However, Bad Education is not a story about a model educator and an efficient school board. The film takes time to reveal what it is really about, but gradually there is a progression of events that culminate in a series of damming revelations.

When Rachel Kellog (Geraldine Viswanathan) a reporter for the high-school newspaper, is assigned to do a puff piece about the ‘Skywalk’ project, Tassone encourages her to write something more substantial – an exhortation he will learn to regret.

As Rachel delves deeper into the financial background to the ‘Skywalk’ build, she notices that while there seems to be money for this new construction, major problems in the basic fabric of the school’s facilities are left unaddressed. She then begins to uncover inconsistencies in the financial bookkeeping.

Just weeks before a scheduled vote to approve the district budget, it’s discovered that assistant superintendent Pam Gluckin has been embezzling from the schools’ coffers for years to the tune of hundreds of thousands of dollars. Gluckin has been flagrant in flaunting an opulent lifestyle, acquiring beachfront properties and luxury goods.

When the scandal first comes to light, Tassone persuades his colleagues on the board to cover it up, rather than risk damage to the prestige of the school and the trust of the community.

They tell Gluckin that they won’t press charges, but instead they’ll quietly dismiss her and establish a pay-back scheme but cover up the whole sordid business so that confidence won’t be lost and the upcoming budget decision won’t be compromised.

However, the problem doesn’t go away. Rachel continues her investigation and finds that listed contractors turn out never to have worked for the school, or to be totally fictitious. Soon, Tassone’s own meticulously crafted secret life begins to unravel. No-one had even commented on the fact that even though he draws a teacher’s salary, Tassone is always conspicuously well-dressed, drives a very expensive car and travels first class.

When Rachel gets proof of fraud, she still ponders the ethics of publishing her story in the school paper, knowing that the fallout could damage the lives and careers of people who were kind to students and who worked to make the school better. Still, it took a curious high-school reporter to uncover inconsistencies that the adults on the school board had totally overlooked. Rachel’s story made the high school paper, then became national news.

As it happens, Bad Education is written by a former Roslyn student, Mike Makowsky, and it’s a credit to his excellent script and to Finley’s direction that the movie avoids making total villains out of Tassone and Gluckin. Instead, it suggests that they care about the school, the staff and the students, but also reveals how they convince themselves they are not doing anything wrong. The film indicates how such infractions can accumulate - a few dollars here and there at first, then, when nobody notices or asks questions, it turns into a lot more.

There are strong performances from the entire ensemble, but Allison Janney in her supporting role is again top-notch. Her Gluckin is efficient, likeable, and although outrageously extravagant in her lifestyle, she is also generous. She allows her entire family to benefit from her theft!

But the star of the film is Hugh Jackman, who in a varied career spanning twenty-five years manages to make Tassone sympathetic - a man who truly believes that he and his people are doing their best for the students, the parents and the school. He imbues his character with genuine concern, charm and geniality, grounding his decisions in credible emotions.

Most films indicate that corruption occurs amongst morally bankrupt people, but Bad Education does not present a picture that is so black and white. Instead we look at the morally grey areas that some people choose to inhabit. Even when presented with their crimes and their secrets, they’re merely mystifying in their incomprehension regarding their own wrongdoing, and yet somehow not entirely ignoble.