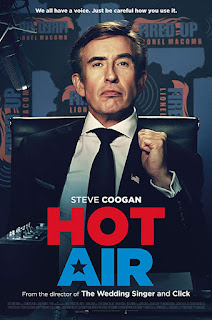 "We all have a voice. Just be careful how you use it" says the film's tagline. Steve Taylor-Bryant carefully watched Hot Air, out now to own on Digital download...

I quite like Steve Coogan and, whilst not everything he does lands with me, I appreciate that he always tries to do something differently. Comedy is his forte and so when a film directed by Frank Coraci, who is Adam Sandler and Kevin James’ go to guy, came across my desk I was always going to give it a go. The fact it involved alarmist media, political connotations, and a dysfunctional family were just bonuses and I’ll be honest and say I was expecting a balls to the wall comedy, an Adam Sandler humour fest but with Coogan in the Sandler role. What I wasn’t expecting was Hot Air which, whilst funny, is a highly emotional charged film about family, about right and wrong, and about saving yourself from the brink.

In Hot Air, Coogan plays Lionel Macomb, a right wing radio talk show host, think Fox News but in your ears, a man who delights in fearmongering, who never waivers from his belief that he is right and everyone else is wrong, and a man who does not hide his disdain for those who think life should be fairer, or better, or who just think differently to him. But Lionel has a past like anybody else and, when his sister enters rehab for another bash at sobriety, his sixteen-year-old niece, Tess (Taylor Russell) turns up on his doorstep to stay for a while. Tess is a bright girl who has a scholarship to a top blue riband school if she wants it, but who also believes in forgiveness and redemption and that people can be better and so has put off school due to a promise she made that she would only attend if her mother succeeded in rehab. Lionel gives her a roof over her head, a job at his radio station, but struggles to bond with someone so completely different to the person he has become. 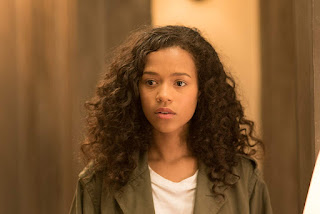 To go on with more explanation of the plot would take away the satisfaction I truly believe you will get from watching this film for yourselves. Yes, the politics are skewed a little but the people that are poked fun at in this movie either wouldn’t watch it or wouldn’t get the joke anyway so that can be forgiven as it helps the story unfold in such a marvellous way. The casting is astonishing. Coogan is brilliant as the hateful right wing power hungry disc jockey, an educated Trump version of Alan Partridge he is not. Coogan breathes life into a trope that easily could have been taken too far if it was an Adam Sandler type vehicle, and he makes everything he says and does seem meaningful and perfectly placed for the character he is portraying. But he doesn’t carry this film alone, also bringing a wonderfully touching screenplay by Will Reichel to life is Taylor Russell as Tess, whose acting skills in Hot Air are unrivalled. She plays the innocence of youth perfectly, but also the deeper emotional moments have an effect on the audience because of her delivery and I can only hope to see more of her on my screen soon because she is already a powerhouse of a performer. The support cast are all brilliantly picked with Neve Campbell as Valerie, Lionel’s girlfriend and publicist, another standout in a film of standouts.

Hot Air is satirical, it is humour well played, but it is also a beautifully told story of familial relationships. The comedic moments land well, Lionel’s ‘Network’ moment is a joy to behold and the snarling bile Coogan delivers is excellent, although it is some of his softer moments that are the ones that hit hardest. I was expecting a farce but I what I enjoyed was just over an hour and a half of perfectly executed family drama with some wonderful lighter moments, with the line I have quoted at the top of this piece being the best analysis of the state of today's politics that I have heard.