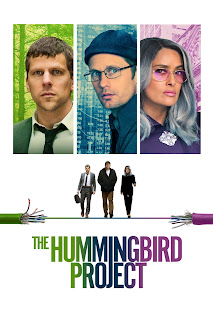 Everything is on the line as Susan Omand watched The Hummingbird Project, coming to digital on 4th October...

There is a section in a book, Flashboys, by Michael Lewis (reviewed here by Steve) that describes the true story of the building of a high speed fibre optic cable between two stock exchanges, in that case it was Chicago and New York, in order to speed up the flow of transactions by mere milliseconds and allow some traders to get the jump on everyone else by being “first in line” with share prices of desirable stocks, able to buy low and short sell high because they know that the requests are coming in and have artificially driven up the price in a process called High Frequency Trading. From the PR that I read for The Hummingbird Project, that it was "The Wolf of Wall Street meets The Social Network," I was expecting this film to be a rehash of that story – all high tech action, corporate espionage and fighting against the competition to see who could best the capitalists at their own game. Well, it is and it isn’t.

It is, in that stock trader Vincent Zaleski (Jesse Eisenberg) sets out to construct a fibre line to shave a millisecond (the speed of one flap of a hummingbird’s wing) off the data flow between Kansas stock exchange and Wall Street, using computer code that his genius cousin Anton (Alexander Skarsgård) is working on. The intellectual property for the initial code, however, apparently belongs to their (now ex) employer Eva Torres (Salma Hayek), who also has other projects on the go to try and beat the data flow time, and she doesn’t want anything or anyone to stand in her way. Vincent garners some investment from a high flying millionaire (Frank Schorpion), who buys into Vinnie’s story that everything is completely under control and it is all doable, and the Zaleskis hire their main drilling contractor Mark (Michael Mando) who really seems to know what he’s talking about, passing an interesting test set by Anton at the interview. The three of them set out to do the seemingly impossible; to drill a hole, 4 inches wide, in a perfectly straight line, between Kansas and New York, crossing thousands of properties, fording rivers, undercutting protected forests and going straight through the Appalachian mountains… of course there are going to be problems. Anton’s code isn’t quite finished, he holes up in a hotel away from his wife and family so there are fewer distractions for him, there are issues with landowners, not least the Amish, and ethical dilemmas, Torres sends spies after them and Vinnie, well, Vinnie receives news that he really wasn’t expecting.

And it’s these problems that make it a lot more than your average David and Goliath, beat the corporations at their own game, action thriller. I don’t want to put in spoilers so you’re just going to have to take my word for it that, alongside every fist pumping small win (and there are several – one point in particular had me physically cheering for them) there are also times when it’s two steps back for every step forward as the problems stack up and you think they’re never going to get through it. It’s at these points, thanks to the superb writing and direction of Kim Nguyen, that we get to see the depth of the characters, Vinnie, Anton and, to a certain extent, Mark, as they juggle with everything being thrown at them. Eisenberg is, as always, highly watchable in this. From his brash, confident start in the film, working all the angles and being highly persuasive, throughout all the problems they face, he runs the gamut of emotions behind the scenes while always putting a brave and stoic face on for Anton, encouraging him and pushing him, while hiding the biggest of the problems. Their relationship is highly believable, there is real heart there, and, at times, it reminded me in a way of the relationship between Tom Cruise and Dustin Hoffman in Rainman, in that it had that same transition in chemistry from convenience to close bond and the switch in dominance from one to the other. 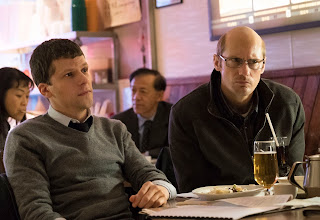 But it is Skarsgård, as Anton, who stood out for me and for the exact opposite to the usual reason that I watch him; because he’s not playing on his looks this time, we really get to experience him as an actor. In a bald wig and cardigan, he is pretty much unrecognisable physically at the start of the film. His meek demeanour, hunched stance and real standoffishness is so unlike any of the other characters I have seen him play that it took me several minutes to realise it was him. Playing the computer nerd, without hitting every stereotype going, is a true art and I found myself really connected with his character, making his lows my lows, following his thought processes as he shaves tiny amounts of time out of his coding and cheering the small triumphs when they happened – there is a moment quite late in the film when Anton does something that makes other actions earlier in the film click into place, when you realise he wasn’t as gullible as he makes out and you can see that “shift” in his eyes, it’s tremendous and will stay with me for a long time.

I must also mention the cinematography as DoP Nicolas Bolduc makes the most of the beautiful landscapes, the initial tracking shot is absolutely stunning, and the music from Yves Gourmeur just enhances the whole thing rather than overshadowing it. And something else I made note of as I watched was the number of “working” roles, in both the tech trading and drilling sides, that were given to women and it didn’t feel unusual, out of place or shoe-horned in for them to be there and this has to be applauded. The only slight downside through the whole film, for me, was Salma Hayek who was very underwhelming and wooden in her role as corporate bad-guy, I’m not sure why though, I guess I maybe expected a bit more menace from her.

So yes, The Hummingbird Project is an all action, high stakes, high tech thriller but it’s more a story about people, tackling the odds, taking the consequences and deciding what, ultimately, you want your goal in life to be. Worth an investment of your time, definitely.