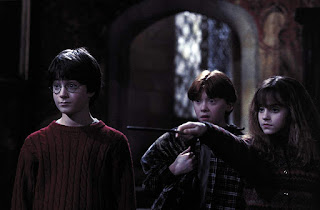 Someone has given Daniel White a sock so, instead of tidying the office like a good house-elf, he's written about the films of Harry Potter (some spoilers)...

Find Daniel's AlbieMedia article on the music from the films here

Eight films (if you count Deathly Hallows twice) 7 books, 2 stage plays (if you count Cursed Child twice) 8 soundtracks and 4 composers. Plus two spin off films and two theme park type thingies. Merchandise revenue of magical levels and real life castles (I've just been to Hogwarts myself.) It is hard to believe that when J K Rowling started writing the adventures of Harry Potter she barely had enough money for a cup of tea. Now of course everyone knows who Harry Potter is and everyone knows the story about the boy who lived. Surely, the Harry Potter films must be one of the most successful franchises of all time, not just in terms of revenue but in terms of sheer cinematic quality. With Harry Potter you never have to endure the law of diminishing franchisal returns and not once do you get the equivalent of Superman being all blurry (just meh for the Quest for Peace.) Harry Potter isn't just for kids either, its appeal reaches to adults and not just those of us that use our kids love of the films as an excuse. 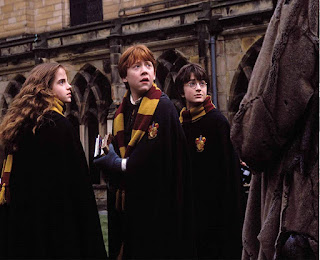 While I was at Alnwick Castle recently it was amazing to see the number of adults dressed up who didn't have potential junior Hogwartians (is that a word?) in tow either. Quite honestly, the broom riding lessons were ALL adults! What makes Rowling's books so immersive, so addictively successful, isn't just down to the fact that deep down ALL of us wish magic was real and that the divide between platforms 9 and 10 did actually lead to the Hogwarts Express. It is also testament to the sheer quality of Rowling's writing, character development and story arcing and it's these areas I want to write about. If Chris Chibnall (current Doctor Who show runner) was half the writer Rowling was I wouldn't have had to abandon my Doctor Who fandom or at least temporarily suspend it (YES, I am bitter.) It isn't easy to write one novel but to write SEVEN, create a new world order (Muggle versus Magic folk) and not drop, for one line, character development and continuity is astonishing. So, if you have your wands at the ready let's swish and flick and enter Harry's world for a little bit of a Potter! 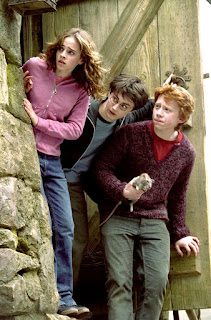 The eight Potter films span 7 years at Hogwarts and as you would expect the main characters experience a huge evolutionary curve during this time. Daniel Radcliffe, Rupert Grint and Emma Watson are so well cast that by the end of Deathly Hallows part 2 you feel like you have grown up with them. That's because you have! Witness cute ickle Dan Radcliffe during Philosophers Stone (all wide eyed and innocent) versus grizzled, angry Voldemort slaying, Death Eater Dispatching Harry when we get to Deathly Hallows. What a journey!

We stand by his side as he endures hours of bullying at Snape's hands, we grieve with him as his heart breaks when Sirius is killed, when Cedric Diggory his murdered. Radcliffe IS Harry Potter and we feel his pain, celebrate his success and we are by extension enrolled into Hogwarts as he is. For me, the moment when he witnesses Snape murdering Dumbledore and the subsequent rage that erupts as he angrily fires wand blast after wand blast at him also mirrored my own anger and sentiment. Harry Potter is the conduit, the bridge between the Muggle world and the wizarding realm but he is also our ticket into Hogwarts.


"so tell me, what is the function of a rubber duck?"

What I love about Radcliffe's portrayal of Potter is it is exactly as I imagined him when I read the books. That is sentiment that I echo for every single character brought to screen. Coltrane as Hagrid, the late great Alan Rickman as Snape and the awesome Richard Harris and, from Prisoner of Azkaban, Michael Gambon, as Dumbdore EXACTLY as I read them. Rupert Grint and Emma Watson are wonderful as Ron and Hermoine and their onscreen affections and then romance believably growing as they do with their characters. 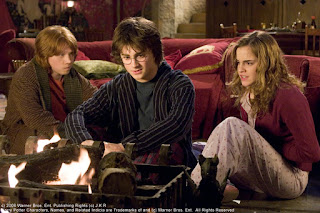 Of particular delight is Grint's voice breaking performance in Chamber of Secrets and later on, Watson's development from bookish Hermoine to Draco punching and Death Eater dispatching is just tremendous. Radcliffe, Grint and Watson's onscreen friendship grows exactly as their real life one does. Seriously, can you think of a film franchise that so perfectly traces both character and actor development in the way that the Potter films do?

"Just because you have the emotional range of a tea spoon, Ron"

Of all the relationships within the films the one that stands out for me is that of Potter, Snape and Dumbledore. Philosophers Stone begins with Dumbledore being very much Potter's adoptive Father figure, having saved him after Voldemort killed his parents he is a constant guide throughout that revelationary first year and through to Chamber of Secrets. They are so close that, when Dumbledore deliberately steps back (wrongly attempting to reduce the danger to Potter) during Order of the Phoenix, we feel the confusion and sudden absence almost at intensely as Harry himself. The key moment during Halfblood Prince is when Snape and Dumbledore begin to shift places in terms of villain and hero. We have always known Dumbledore manipulates and is one step ahead but the extent of his manipulation tips the scales and they tip in Snape's favour. No one could argue that Snape was justified in his hatred (acted or actual) of Potter but it at least becomes understandable when we discover how Dumbledore has played him. Used his love of Lilly Potter and his Death Eater status to place him as a double agent, still confidant to Voldemort himself. Forcing Snape to murder him must be one of the film franchises pivotal and emotionally intense scenes and yet only once the events of Deathly Hallows play out do we feel sympathy for him. Rowling does give us some hints of Snape's lighter side (his counter curse during the Quidditch match as Quirrel attempts to kill Potter) But Snape sees too much of Harry's father in him to truly show his real feelings and yet we see his love for Lilly overcome his darker motivations. Snape's death is one of the scenes that you never recover from and it still is tear jerkingly powerful. 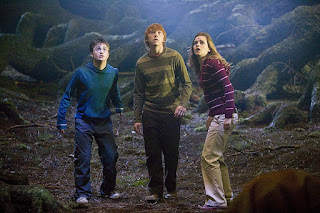 Rowling has created characters that are truly believable in that they show flaws and defects as well as positive and commendable qualities. How many of us have shaken our heads as some Political leader or other refuses to admit what is blindingly obvious to us all (Minister of Magic Fudge can be forgiven for refusing to even consider that Voldermort had returned) The power of the characters brought to screen within the Potter Franchise work so effectively because there is no weak link, no character that doesn't  gel or do what they are intended to do. Even the lesser characters are memorable and the films are a testament to ensemble acting at its very very finest. I still find myself musing over whether Luna Lovegood ever managed to find all of her misplaced belongings even now. If the mark of a good actor is that that they blur the lines between acting and move towards bringing to life a character then Harry Potter has assembled a cast that achieves this task in every way.

"Do Nothing? Offer him up as bait?"

But great characters on their own do not an effective film make. They have to be given tasks and stuff to do in order for a film to develop and, in  a franchises case, those tasks need to contribute to a story arc that spans the length of the entire franchise. Yes, we know that Potter is limbering up for a monumental showdown with the noseless Voldermort but his journey to that epic encounter is so complicated and meandery a lesser writer would have got lost time and again. It is amazing when you think that we only find out about Horcruxes in Halfblood Prince and yet it feels like we have always known Voldermort had split his soul into parts. 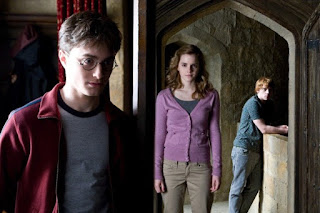 When Tom Riddle's diary is pierced by the Basilisk tooth didn't it feel like a part of Voldemort died? Rowling introduces story arcs that she has sown from the very beginning and at no point does this feel jarring or tacked on. Interweaving the expansive character development and their own stories with the over arching themes is something Rowling does in every single film and when you think that the novels themselves include much more detail and subplotting than the films have time to convey you can only marvel at her story telling skills. Each film has its own feel, its own journey and its own twists and turns (the revelation that Peter Pettigrew betrayed Harry's parents and not Sirius, Voldemort's return and the death of Cedric Diggory) but all of them build towards the events of Deathly Hallows Parts 1 and 2. Each film leaves an indelible mark but it is only when you sit back and look at them as a whole franchise does the scale of the work really hit you. It is something that has been so carefully and painstakingly crafted that its perfectly interlocked cogs and wheels work without creaking or faltering. I still cheer when Fred and George break the silence of Umbridge's examination and break out of the educational confines to open up shop in Diagon Alley. 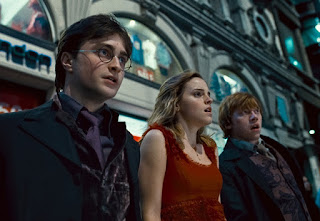 The locations for the films is the other element that makes the story come alive. Whether you focus on the majestic beauty of Alnwick Castle (Hogwarts for the first two films) the rustic charm of The Weasley House or the delights of Diagon Alley they all breath a realistic life into films that only work if you believe they actually exist. Even when you consider that filming from Chamber of Secrets onwards was more studio based (due to the secrecy required for filming at that by now the cast were house hold names) the locations sequences are still breathtaking (Dobby's death scenes on a Pembrokshire beach have been marked with a permanent gravestone) Cinematic trickery and the quickest journey from a tower in Durham Cathedral to the turf within Alnwick's walls so effectively combine that you could almost believe that young Harry Potter could fly his broom (in Philosopher Stone) Slight continuity errors don't seem to matter (the walk to Hagrid's hut seems strangely downhill and more rocky in later films) because you are so focused on the atmosphere that is created. Special mention to the CGI used, considering the earliest Harry Potter film was made in 2001, it dates exceptionally well, something that is more often than not a massive problem with fantasy or sci fi films. How many of us have wistfully pressed against the wall divide between Kings Cross platforms 9 and 10, hoping that we would find ourselves on Platform 9 and 3/4? Surely not just me! 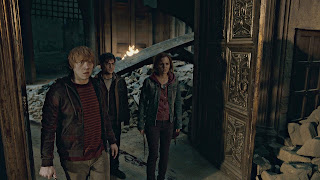 Final comments draw me back to the characters themselves and after all the spells are done and the twists and turns completed we are made to actually care about them. So, rest in peace Severus, Sirius, Dumbledore and the many that fell in the fight against Lord Voldermort. Lord Voldermort who, if the legends had been true and he was as all powerful as he claimed, may have found time to magic up a decent nose for himself! I look forward to my next visit to Hogwarts and remember, "It's Leviosa not levioSAAAAA!"