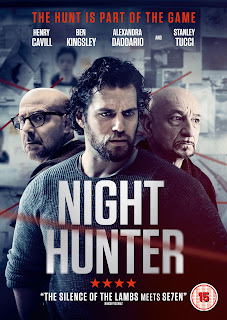 On DVD from Monday thanks to Signature Entertainment, Steve Taylor-Bryant set his sights on Night Hunter, the debut feature by director David Raymond...

A washed-up cop, a guilty judge and a psychiatrist is not actually the start of a joke, but a trio of people thrown together for an investigation into the disappearances of some young girls. The cop is Marshall (Henry Cavill), a weathered and beaten-down law enforcement officer who is also a divorced dad with a daughter of the age where online messaging is a real danger. This is a concept very real to us fathers of daughters, and Marshall is on the case of a missing teenage girl so all the more real to him. The judge is Cooper (Sir Ben Kingsley) who, whilst presiding in his court room, was handcuffed by laws not stringent enough and had to let paedophiles walk free to just watch them re-offend. Along with his ward - I’m guessing here as their real relationship is not explained - Lara (Eliana Jones), they dupe paedophiles into meeting Lara and then capture them and castrate them. When Lara is taken by one of these men, a chain of events occurs that leads Cooper to work with Marshall as a serial abuser is caught.

The synopsis doesn’t really do the story justice and I may have already referred to Cavill and Kingsley, but I haven’t even mentioned that Stanley Tucci is in this, as is Nathan Fillion, an excellent performance by Alexandra Daddario, and a highly convincing turn by Brendan Fletcher as Simon. The casting is very solid, if you can look past an Englishmen working as an American Police Lieutenant, and the performance of Fletcher especially deserves very high praise.

However, the film is slightly let down by how it is put together, and this is going to end up as a rant.

For about the third or fourth time in recent months I am going to have to mention in a review a person or persons on the crew that rarely come under the spotlight, mainly because if they are good at that their chosen field you shouldn’t need to, but here I go again mentioning editors. What should have been a great film was merely good, and the fact that I can notice it is all about the editing should be sending red flags out to all filmmakers. On a few films recently, when I have researched who the editor was I noticed it was their first gig, and I appreciate everybody has to learn and gain experience so have not gone on too much about it before. However, when you look up Night Hunter you don’t find one person wholly responsible for the editing, it's more a team all in charge of different aspects of the job, and I am flat out stating you cannot edit by committee. There are scenes within Night Hunter that are the culminations of incredible writing and stunning performances but they just do not land because of some artistic style that was decided in the editing room.

There was, however, enough in the story crafted by David Raymond for me to add him to my watch list; he wrote some real human moments, some fascinating plot twists, used an intriguing premise in a way I had not seen before, and didn’t seem overawed by the incredible cast assembled. His characters had depth, his grasp of his subject matter and all its intricacies was spot on and, with a little more finesse in the final cut, the movie would have been an epic example of the thriller genre.

Unfortunately, whilst it's still great and worth a watch, it's not quite what it could have been.