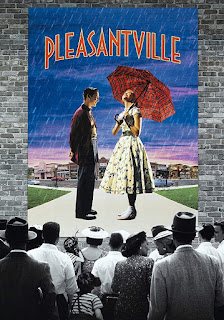 Brought to you in glorious technicolor, Daniel White discovers the allegory of Pleasantville is not just black and white...

I've never understood mainstream film marketing and its fascination with likening films to other previous hits. It's lazy! Kinda implying "if you like this huge film you will LOVE ours so just buy a ticket OK?" Sometimes they get it really wrong and massively undervalue a new film's power to capture its own audience. Pleasantville is one such film so please ignore the lazy PR! It is so much more than "Back To The Future meets The Truman Show" and the 1998 released film has an even greater relevance in today's tumultuous times. You need to watch Pleasantville because it screams out to be seen and, if you have seen, it you need to watch it again. Here's why!

Pleasantville is both a place and a yesteryear TV show where nothing goes wrong, everything is always the same and it doesn't even rain. The old black and white show has a cult following and mega fan, David (Tobey Maguire) can't wait to watch the marathon. His sister, Jennifer (Reese Witherspoon) has other plans and has a hot date with some attractive college guy. David and Jennifer couldn't be more different and yet they suffer from the same problem. David is the classic college nerd who never quite has the guts to ask out his college crush. Whilst Jennifer is a school drop out in waiting and her vapid existence has no meaning or purpose other than to satisfy her immediate cravings. They are both trapped in living how they are expected to live. They find themselves transported into the fiction of Pleasantville and become as black and white as the occupants of the show themselves. So far so Truman Show, for the other characters in Pleasantville are as real as David and Jennifer. For David, this is a dream come true and an opportunity to live a life surrounded people that he shares commonality with. For Jennifer, though, it is her worse nightmare as her wild rebellious side is now straitjacketed into the sort of banal existence she has sought to resist all her life. David and Jennifer are now forced to become Bud and Mary Sue but things begin to change when they both attempt to be themselves.

Pleasantville has a powerful message of non conformity, of being yourself no matter what others think of you. It shows us that we all have a choice in how we live our lives. We can be ourselves, vibrantly colourful in all our mistakes and successes, or we can conform to what society says we should be; in other words, we can be black and white. As David and Jennifer introduce Pleasantville to really living and not just following the same rutted road, the town and its residents change. It's the small things at first, red lips or a red rose. But soon it spreads and people change, people become alive. Books which previously had been blank are filled with words and stories that inspire generations. Pleasantville becomes full of dreamers who dare to dream and artists who dare to create. All of a sudden what they have been told they are is no longer the truth. As husbands come home to burnt shirts and empty tables, the old guard are scared, scared of change and they attempt to maintain order, to enshrine their truth and hold it in place. 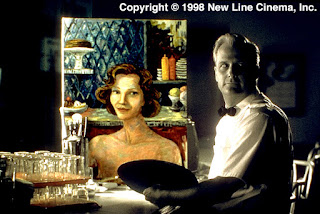 As Soda Shop owner Bill Johnson paints, discovering artistic creativity for the first time, and Pleasantville is bathed in colour, the Mayor attempts to stop change and to force things back to the way they used to be. It is at this point that Pleasantville becomes more than a mere whimsical tale to encourage us to be ourselves. Because there is a cost to being truly us and it can be dangerous. Throughout history, those that hold the power have attempted to box in, to limit our ability to think freely. To control our minds with misinformation and lies, to force us to conform to their ideals, to their world view. Limiting our access to dangerous literature, art and music when it is deemed to threaten their own ability to control. Burning of books, mob violence and then the rules are agreed on. Always in the interests of safety, of decency, always to protect us but the end result is always the same. We find ourselves with newly forged chains, shackled mentally and forced away from colour and back into black and white. When this rule of law is resisted we are ridiculed, isolated and controlled, then we are silenced. However, once you have started to live in colour why would you want to go back to black and white, even if you could?

David's chains are different to Jennifer's and yet both of them have to discover who they really are, in order to transform. All our journeys are different and our path to discovery is one we travel at varying paces. There are some who are happy with conforming, comforted by the routine and reassured by the lack of variation. But there are some of us who yearn for more and seek enlightenment, allowing us to be who we were created to be. Not what others want or need us to be. Without resistance what follows is always what follows; Apartheid, segregation, alienation, violence and death. The dehumanisation of those that are different because unrestricted creativity and self expression terrifies those who crave control. Pleasantville has changed and those who resist what has become the new reality seek to deny that which is obvious to others.

As a Musician, I use my music to express my heart and my mind as well as to celebrate my individuality. Creativity and free thought are fought against by those who know the power these things hold to free those in chains. It starts with a single red rose and ends with a colourful explosion. As Pleasantville is bathed in full Technicolour, it is a victory, not just for free thinking, but it stands as a clarion call for anyone who wants to be more, for anyone who passionately seeks to be wholeheartedly themselves.

Watching Pleasantville again made me realise that I, for one, will never go back to being "black and white" and that, perhaps for the first time in my life, I KNOW WHO I AM.