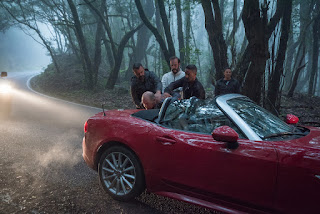 Corneliu Porumboiu, a filmmaker whose movies are known for satirising bureaucracy and corruption in post-Ceaușescu Romania, has now ventured into neo-noir crime-thriller territory with The Whistlers.

The movie begins when Cristi, a police officer based in Bucharest, is travelling by boat to the Spanish island of La Gomera. He has become involved in the very drug-money-laundering scheme he was supposed to investigate.

He has been invited to the island by sultry femme-fatale Gilda (Catrinel Marlon) so that he can learn the language of El Silbo - the island’s whistle language, which converts vowels and consonants into squawks and trills unintelligible to all but those that practice it - “When cops hear it, they think the birds are singing,” says Kiko (Antonio Buil), the thug tasked with teaching Cristi the whistling skill and leading him through the criminal underworld.

This is certainly an original conceit for a crime film, even verging on the surreal, but interestingly enough, there actually is a whistling language on La Gomera. The Whistlers uses this unique method of communication within the framework of a crime story to create another storytelling device (needing its own subtitles).

After the opening sequence the film reverts to a series of flashbacks set back in Romania, which establish why Cristi and Gilda are on the island of La Gomera and why they need to learn to communicate in the whistle language.

Gilda is the beautiful girlfriend of a Bucharest wheeler-dealer called Zsolt (Sabin Tambrea). She arranges a meeting with bent cop Cristi in the city, in order to entice him to take part in a plot to release Zsolt from police custody.

However, Cristi has discovered that his superior, Police chief Magda (Rodica Lazar), who herself doesn’t balk at a few shady practices, doesn’t quite trust him and has bugged his flat and placed secret surveillance cameras in all the rooms. To fool the cops, the lovely Gilda conveniently pretends to be a high-class sex worker and has sex with him in his bedroom in front of the secret cameras. 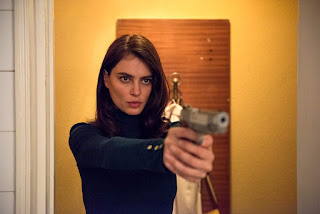 I say ‘conveniently’ as Gilda’s early nude sex-scene gives members of the audience a chance to have a good ogle at her naked form and perhaps allow them to empathise with the rather dull, middle-aged Cristi, who can’t quite believe his luck. For Gilda, the sex act is just business - a performance for the cameras. Cristi, however, is totally bowled over by her sexy beauty and agrees to her demands, in true noir-film tradition regarding seductive femme-fatales.

The plot of the film revolves around huge amounts of money that Zsolt has hidden somewhere in a mattress factory, possibly on behalf of the powerful Spanish crime kingpin Paco (Agustí Villaronga).

The Whistlers follows the ’pulp crime story’ traditions featuring femmes fatales, gangsters and corrupt policemen, and similarly it does occasionally touch on themes such as power, manipulation, deceit, double-dealing, violence, trust and betrayal.

To this end, director Porumboiu seems to make his central character into rather a cipher - a colourless ‘everyman’ figure. Although he’s on the take and in the midst of the action, Cristi is strangely passive. His bland personality is no match for the two women that emerge as the major movers in this violent world of criminal men.

Gilda wields her sex-appeal as much like a weapon as she does her shooting skills, and with similar cold-blooded resolve. She draws Cristi into the plan while keeping her actual agenda a secret and it’s never indicated that she views him as much more than a convenience, or perhaps feels little more for him than sympathy. The idea of theirs being a mutual love affair is not really convincing, even if Cristi finds himself smitten.

Striking as she is, Gilda’s role as seductress/mannequin pales in comparison with that of police chief Magda - a compelling performance by Rodica Lazar. Magda is a tough strategic thinker, occasionally using dodgy police practices and watching others, while she avoids those who she knows are watching her. She doesn’t trust anyone, but gets the job done when the men around her fail, rarely missing a trick. She organises the entire police operation. She has Cristi pegged from the outset and manoeuvres him into co-operation, monitoring his movements from afar, all the way to criminal kingpin Paco.

Juxtaposing scenes of gloomy Bucharest with the semi-tropical colours of sun-soaked La Gomera, The Whistlers builds towards a final showdown, offering a decent denouement to a thriller with a reasonably twisty plot. Less satisfying, however, is the lack of coherence in the film’s themes – its primary characters and hidden agendas remaining rather vague throughout. It’s a film in the hard-boiled crime genre which ends with a whistle, rather than with a bang.