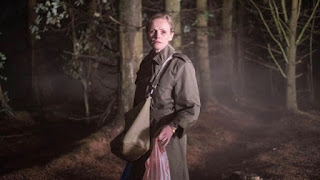 "Meet the doppelgängers, the outcasts and the weirdos" says the marketing for the London Film Festival short film selection titled When You Think You Know How It Ends. Our own weirdo Steve Taylor-Bryant watched one of short films, Be Still My Beating Heart...

There is something disturbingly artistic and compelling about Ruth Paxton’s dysfunctional family thriller and, despite at points my lack of understanding as to what was going on, I just couldn’t keep my eyes off it. Be Still My Beating Heart is the story of two sisters, Diana (Maxine Peake – Funny Cow) and Sarah (Elysia Welch – Outlander) who are afflicted with pain and suffering and dependent upon each other for different reasons. Sarah has a physical disability and breathing issues that require Diana to bathe her, do her physiotherapy, and make sure she takes her oxygen via her mask, and Diana has mental health issues that make her uncomfortable and nervous being outside and around people so she needs Sarah to need her to gain any kind of personal value.

Sarah tries to be fiercely independent though and on her birthday is online messaging with a friend and wants to put on a dress and shave her legs and go out for a proper drink to celebrate which causes a huge row and Diana wants her to stay in and have warm milk and watch romantic comedies with her. Sarah is obviously stuck at home the majority of the time, but Diana has a job in a morgue cutting up dead bodies and it is at the morgue we first meet her. After an argument on the phone about having a chippy tea Diana relents and grabs some chips and her discomfort at being in the confined space of the chip shop is palpable. Here Paxton starts to use the imagery that will be interspersed throughout the film, close ups of people eating with hideously overbearing sound effects, a dead animal corpse covered in maggots, another wild animal eating the corpse.

The day after the row Diana leaves Sarah’s breakfast on a tray outside her room and goes to work. When she returns home, the tray is still there untouched, and Sarah is nowhere to be seen. Checking her laptop Diana discovers Sarah goes out and makes videos when Diana is not around. The next day Diana returns to the morgue and her life will never be the same again, opening the body bag she finds her sister, Sarah; dead. A mental breakdown was inevitable but to have the breakdown occur in the woods near the corpse and the wolf eating that had been the interspersed edits throughout the short was glorious to watch in a sick and twisted way, with Peake so compelling as the distraught sister suffering loss performing with a fraught emotion that was highly believable.

I am not sure I understood everything about Ruth Paxton’s great short film, but I am comfortable that I got what I needed from it, that I understood the relationship between the sisters and was as in sync with Diana as I needed to be to enjoy the film in the way it was intended. It is not an easy film to watch with some sensitive subject matters handled with brute force but also purveying a reality that many find themselves in, so the brutal approach is also one of realistic integrity. The film is very dark in tone and feel and if you like a more psychological edge to your pop culture then you won’t go wrong giving Be Still My Beating Heart a go.