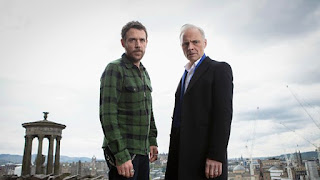 Guilt is a new four-part drama thriller, with an edge of dark Scottish humour, set in Edinburgh. Ahead of its premiere next Thursday (24th) on BBC Scotland (and again a week later on BBC Two) the BBC has released an interview with its writer Neil Forsyth...

In a residential street in Edinburgh, two disparate brothers, high flying lawyer Max (Mark Bonnar) and Jake (Jamie Sives), a record shop owner, accidentally run down an old man, Walter, on their way home from a wedding. Uninsured and under the influence, Jake is persuaded by Max to cover up their deathly deed.

However, their hopes that the death will be passed off as natural causes are dashed when neighbours and relatives begin to suspect Walter’s death wasn’t as innocent as it seems. The brothers find their lives rapidly falling apart as their actions begin to catch up with them.

Their increasingly desperate attempts to conceal their guilt leads them further into a world where everyone seems to have a hidden agenda and they discover they can trust no-one - including each other. 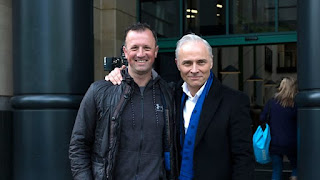 Writer Neil Forsyth gives an insight into the guilty goings on in this compelling new drama.

Can you set the scene with Guilt?


Two very different brothers - who spend as little time together as they possibly can - find themselves driving home late at night from a wedding. By the end of that journey, their lives have set off on alarming new tangents.

I wanted the brothers’ story to feel like quicksand. The more they struggle, the worse it gets.

Can you give us a taste of things to come?

Stories that seem very separate begin to interweave, stories that seemed straightforward hopefully become more complex. I would hope that what is a very simple entry point leads to a unique and surprising overall story.

They view each other with bewilderment. Max respects material worth, drive and ambition. Jake values the riches of the soul.

Why is there such disparity between the brothers?

We start to discover that, along the way, their lives were marked by the same family tragedy, and to cope with it they set off on opposing paths in life.

Are all the characters guilty of something?

Yes, to differing degrees and they react to the guilt in differing ways. But I was interested in writing a show with that thematic link between the characters. 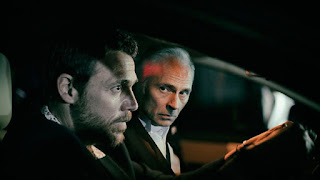 What inspired you to write Guilt?

I wanted to write about siblings, which I think is the most dramatically interesting familial relationship. Because you have two individuals, with their own lives, who can be very different, but are still tied together by that huge emotional hinterland. And from there it was just about writing an interesting story. I found it a very liberating approach.

I didn’t know where the story was going when I started, I worked it out along the way with the help of the executive producers Neil Webster and Kirstie Macdonald, who were both brilliant at helping me corral the story.

There’s a strong vein of black humour running through Guilt - why was this important to the storytelling?

I find it hard to watch dramas where no-one says anything remotely funny for six hours of television. It’s so artificial. Humour is one of the major ways that human beings react to extreme pressure, it should always be woven into drama and I think that’s what all the best dramas have done, from The Sopranos to Breaking Bad to The West Wing.

What was it like seeing your vision come to life? Is it how you’d imagine it would be?

I always visit the set on shows, particularly for key scenes, or things that we were still working on after rehearsal. It was really exciting to watch Guilt be put together by such a fantastic team.

The director Robbie McKillop has done a truly brilliant job, supported by Director of Photography Nanu Segal, the producer Jules Hussey and their hard-working, gifted team. From the design to costume to cinematography, it felt like everyone worked together to give the show a unique style and look which, along with the incredible performances, has lifted the final result well beyond my scripts.

Any stand-out moments from filming?

Being on top of Calton Hill with the sun setting over Edinburgh, watching Mark and Jamie work so brilliantly together in a long scene, was an absolute privilege. For many years I was a barman in Edinburgh who dreamt of being a writer, and while that scene was being filmed I could see my old flat in Leith. It was a very special moment.

If you could be any character in Guilt who would you choose and why?

Walter [the man the brothers’ accidentally kill], because he spends the whole time lying down or being carried about.

This drama will premiere on the BBC Scotland channel followed by BBC Two – how does that feel from a writer’s perspective?

BBC Scotland have been so supportive over the last two years to help bring it to the screen, and to have them and BBC Two airing Guilt feels like an amazing double whammy. To be the first drama on the new BBC Scotland channel is really exciting.

How important is a series like this to the creative industry in Scotland?

I think it’s really important for a Scottish show to have a strong, bold voice. So many shows shot in Scotland could really be shot anywhere, but I hope that Guilt feels like a very local show in a positive way. From the writing to the fact that myself and Robbie went to school together in Dundee, while Mark and Jamie went to school together in Leith, I hope that the voice of Guilt is a strong representation of East Coast Scots in humour and outlook.

Finally, are you guilty of anything?

These days only the banal. But like surely any 41 year-old, I have substantial historical reserves.