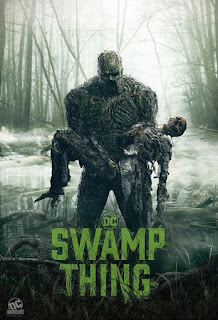 Does Steve Taylor-Bryant get a bit bogged down with the short lived TV series Swamp Thing?...

I didn’t rush to watch Swamp Thing, the latest DC comic to be brought to the small screen, because I found it difficult to get excited about a show that, on the surface, the company had no interest in. Announced, before it even aired, that it was going to be cancelled and shrunk from its originally planned 13 episodes to just 10, all after production had already been started meaning rewrites were now essential, which before I even watched I knew to be a bad thing. Add in the fact that the production was apparently cancelled due to tax reasons, which is an utter bullshit reason to do anything, and the fact that I had no history with the original comic and there wasn’t really any impetus driving me to commit time to it. In fact, I only vaguely remember the original film, so I don’t even have that, and only remember the sequel because, well, Heather Locklear. Still, over the last week or so, real life threw me a curveball that messed with regular work stuff and left me awake at odd times, too tired to concentrate on my ever growing list of review materials, but still in need of some kind of stimulation so the time was right to dive in.

Do you know what? It's not half bad. It's cast with solid performers and, with Len Wiseman directing at the beginning and James Wan involved, it's very pretty on the eye in a dark, gothic horror kind of a way. The Swamp Thing costume is as convincing as a plant-based-used-to-be-human-vigilante-fish-thing costume can be, the cinematography has a wonderful high budget feel to it and the story from the off is realistic and compelling. The show really does start almost flawlessly, the only slight criticism I had after four episodes was that we are supposed to believe that all these people from a swamp region of the southern State of Louisiana don’t have an accent. Except, that is, for the wonderfully creepy Will Patton as Avery Sunderland, the town's rich landowner/benefactor but they gave him the most ridiculous wig too so, at first, it was hard to take him seriously. In fact, I got through five episodes before things changed for the slightly generic worst and even then, I had the reasons why as explained in the first paragraph.

Swamp Thing, if it had been left alone to be 13 episodes, or even not cancelled at all, would have been one of the better comic book shows on television. Gary Dauberman (Annabelle) and Mark Verheiden (The Mask) and their team of writers took an unloved IP and wrote something above the standards set by The CW, mixing their specialties of horror and comedy with aplomb. Those first few episodes had some suitably witty and lighter moments which balanced out the John Carpenter and David Cronenberg vibes really well. It only really lost itself when it started to feel rushed to get to conclusion which we really cannot blame the writing team for. Both sides of Swamp Thing, Andy Bean as Alec Holland the human scientist and Derek Mears as the monster, were brilliant, both bringing their A game to the table. Virginia Madsen as Maria Sunderland played the distraught mother well, Will Patton and his wig turned out to be exactly what you want Will Patton to be, and there was a supporting cast of very good performers.

But it is Crystal Reed as Abby Arcane that takes the plaudits. Crystal Reed has always been pretty good - I am not familiar with her work in Teen Wolf but in Gotham she's great - however I never thought of her as a star performer, someone who could hold a franchise up on her own but in Swamp Thing she was brilliant and it is her I feel the most sorry for with the show's cancellation.