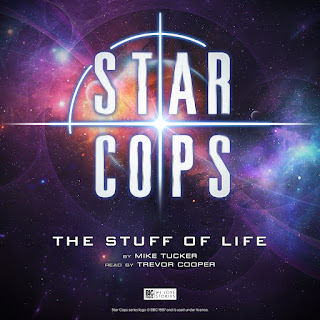 Ahead of the publication next month of a new audiobook, Star Cops: The Stuff of Life, Big Finish have released an interview with the author Mike Tucker...

In 1987, the BBC's Star Cops launched, telling the story of Chief Superintendent Nathan Spring who finds himself on the new frontier, investigating crimes as humanity begins to reach out into space.

Now, from Big Finish, comes a gripping thriller that takes the Star Cops from deep space to the canals of Venice.

A mysterious death on an underwater tour of Venice...

A deadly disease on a remote space station...

A secret so big that people are willing to kill to keep it safe...

With Nathan and Colin away on a fact-finding mission, Kenzy is on the look-out for a juicy case of her own. But the one that falls into her lap turns out to be bigger and more dangerous than anything she could have imagined.

Meanwhile, Nathan's routine trip is rapidly turning into a nightmare. Could the two investigations be linked?

As the Star Cops inch closer to the explosive truth, they come to realise that they are involved in something that has far-reaching implications – not just for them, but for the whole of humanity.

Author Mike Tucker is a Welsh special effects expert who worked for many years at the BBC Visual Effects Department, and now works as an Effects Supervisor for his own company, The Model Unit. He is also the author of a variety of spin-off novels and audio dramas, including for Doctor Who, Merlin and Bernice Summerfield.

Tell us a bit about your story (no spoilers!)

My story centres around dubious goings on at a major corporation that provides fresh water to the Moonbase. Nathan and Colin are away checking out the lie of the land on a Mars supply station, the Edgar Rice Burroughs, so it falls to Kenzy to take the lead on the investigation. I’ve also taken the opportunity to give Paul a sequence in the flooded ruins of Venice - a setting that the TV series wanted, but that proved to expensive to realise to a BBC budget.


Where does your story fit in with the TV series?

My story actually takes place between the two Big Finish audio series – Star Cops: Mother Earth and Star Cops: Mars. There are situations and characters that arise as a direct consequence of the first series, and the story sets up a little of what is about to happen in the second.


What is your background/history with Star Cops?

Star Cops was being made at about the same time that I joined the BBC Visual Effects Department so I remember all of the props and models being built in the workshop, and spent a couple of days watching them being shot on the model stage. Sadly I never actually got to work on it because I was busy on episodes of Doctor Who and Red Dwarf, but following the closure of BBC VFX I salvaged a couple of the filming miniatures, which now reside on a shelf in my office.


What is it about Star Cops that really interests you?

The main appeal is that it comes from the imagination of Chris Boucher. Chris’s episodes of Doctor Who and Blake’s 7 and his Halloween episode of Bergerac remain some of my favourite pieces of television, so the idea of playing with his characters was really appealing.


What was the hardest thing to get right, writing your story?

The hardest thing about a Star Cops novel is that you’re not actually writing science fiction, you’re writing a crime story – but a crime story that just happens to be set in space. That took a bit of concentration on my part to ensure that the clues, and subsequent uncovering of those clues, weren’t too obvious. I watched the TV series through to get a general feel for the settings and characters, but given that I had the opportunity to make things a bit more cinematic, I also took a lot of cues from the Sean Connery / Peter Hyams film, Outland.


What was it like to have Trevor Cooper [who played Inspector Devis in the original Star Cops series] read your story?

Trevor is great, because it’s Devis who drives a lot of the tension and humour in the book, so having his voice as the reader is perfect.


Do you have a favourite Star Cops character?

I like all of the leads – it’s a really good ensemble cast. Devis is a great character to write dialogue for, but Nathan Spring is the one who gives you the most to work with. I enjoyed writing him a lot!


Star Cops: The Stuff of Life, read by Trevor Cooper, will be released in December 2019 and is available for pre-order now on download only for £9.99 at www.bigfinish.com