Film - The Dead of Jaffa 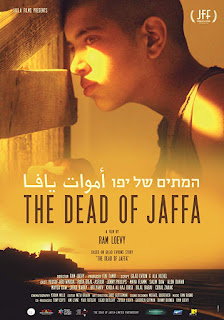 Tony Cross watched The Dead of Jaffa at the UK Jewish Film Festival...

The Dead of Jaffa is the first feature film by Ram Loevy, who is better known for his documentary work. It is a fine film that manages to weave together the story of Arabs-Israelis (or Palestinians citizen in Israel depending on where you’re standing politically) in Jaffa both now and in 1947.

It does this by using the appearance of a British film crew whose director, Jerry (Johnny Phillips) is making a film about his family, starring his daughter, Vera (Maya Flamm) whilst George (Yussuf Abu Warda) and his wife Rita (Ruba Bilal-Asfour) find themselves dealing with three children that have been delivered to their doorstep. They’re the children of one of George’s family who is in prison. They’re traumatised. The eldest, Talal (Jihad Babai), has responded by becoming politicised and angry. The two youngest, Ibrahim (Bilal Babai) and May (Coral Zakkak) seem to gradually unwind but Talal seems to become angrier.

The two separate strands – of film and real-life, of 1947 and the present – gradually intertwine. George gets a part in the film, as a Palestinian Doctor killed by Jerry’s father (who was a British office in the occupying army.) Talal escapes the house and watches – what he thinks initially are ghosts but turn out to be scenes being filmed by Jerry.

Jerry and his daughter argue about what the film is trying to say. At one point in the film they have an exchange over a scene:

Which is a good argument to be had about a lot of British films set in our colonies. Or indeed about how we talk about British history in general. But here I go myself making the Arabs peripheral to their own story, to their own history. Ghosts rather than people if you like.

Despite the seriousness of its themes this isn’t a film without humour. The scene where Jerry is explaining to a crowd of extras about what he wants to do is pretty funny, but it also sows the seeds that will reap a terrible consequence*.

The invisibility of the Arabs in the stories of both the events of 1947 and in the present day seems to be the key theme of the film. When George clashes with a policeman about the fate of the children the policeman says, “Your objection holds no weight when it comes to the law.” Which seems to sum up the situation of the Palestinians. And George’s response, “That’s exactly why I don’t accept it” might be the clarion cry of the oppressed, wherever they are throughout history.

The film is incredibly moving at times. Rita and George’s marriage feels real. There’s a lovely scene where he explains to his friend, Attorney Ramzi (Salim Daw), that her father had told him that Rita was ‘different’ and that if he couldn’t cope with that he should leave now. But if he could he should never leave her. And George said that he never would.

Rita and George haven’t had any children so the appearance of the three children is seen as something of a gift by Rita and her sister Doris (Maysa Daw). But George worries. They are illegal. What happens if the police find them?

Yussuf Abu Warda and Ruba Bilal-Asfour give wonderful performances as George and Rita. The three actors playing the children are also superb at the two extremes Jihad Babai’s anger and energy feels palpable whilst Coral Zakkuk makes May feel like the damaged child she undoubtedly is. First silent and then gradually opening up before being reduced to a scared little girl again.

This tells the story of a people reduced to the shadows both in their history and their present. Their status marginal, which the little story told at the beginning of the film about the sea battering the cliffs of the cemetery at Jaffa leading to some of the graves falling into the sea seems to be a symbol.

* The history of the unintended consequences of British involvement in the world illustrated in an apparently innocuous series of choices.

Watch The Dead of Jaffa for £4.99 On Demand. Available until Sunday 6th June.