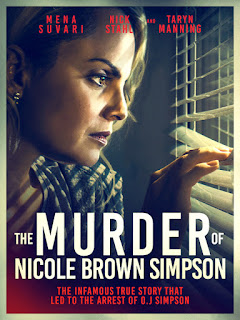 Steve Taylor-Bryant examines the evidence for The Murder of Nicole Brown Simpson, out to own on digital next month from Signature Entertainment...

There is going to be controversy about this film, I guarantee it, and whether you enjoy it as a piece of art is going to be down to your knowledge of the events on June 12th, 1994.

If all you know of the Nicole Brown Simpson and Ron Goldman slayings is the famous Bronco chase down a Los Angeles highway, or snippets of O.J. Simpson’s trial and subsequent acquittal, or maybe you’ve watched the wonderful series The Trial of O.J. Simpson and so you remember the glove not fitting, if this is your knowledge, then I would suggest that director Daniel Farrands' film is maybe not for you, as it will seem far too outlandish and far-fetched as it takes a conspiracy theory, that Nicole and Ron were actually killed by a serial killer, and uses it such a way that you can't help but feel O.J. was innocent. If, however, you were so wrapped up in everything in 1994 because you had never seen anything like it and so continued to watch the news, continued to follow the investigation long after the court acquitted the ex-football star, then the conspiracy theory that plays out in this film is not outlandish and is, in fact, just another viewpoint that has some circumstantial evidence to back it up. If you are like me, you know both stories surrounding the deaths and can watch a film without prejudice, then quite honestly The Murder of Nicole Brown Simpson is a damn fine film.

I am not a fan of the director, I watched Farrands' take on another famous murder, that of Sharon Tate’s with his The Haunting of Sharon Tate, and I really didn’t enjoy it at all. I thought it was poorly written, poorly cast, poorly shot, poorly edited, and to be honest just nowhere near any kind of storyline that could have been deemed viable, so going into this movie I had some reservations. But, credit where its due, Farrands does, for the most part, a great job. Making a movie about a subject that is still today, a quarter of a century later, a bit touchy is brave. Once you have the evidence that O.J. was stalking and harassing his ex-wife, then the film is also brave because you have to fill three quarters of the run time of your movie with the last days of a woman not many people had heard of, without relying solely on a creepy ex-husband, and it is here that Farrands and writer Michael Arter, a scribe I am not familiar with, do a sterling job. The harassment and stalking by O.J. is a known fact and, despite having the part of O.J. cast, played here by Gene Freeman, you rarely see him. The evidence in the film, the feeling of dread the filmmaker wants you to have is all in the camera and the soundtrack from Michael Gatt which is brilliant, lending the film some Hitchcock-ian moments, and the use of piano over the actual brutal murders towards the end was inspired.

Taking the idea, the conspiracy theory if you like, that Nicole and Ron, despite being threatened by O.J., were actually killed by serial killer Glen Rogers a.k.a The Cross Country Killer a.k.a The Casanova Killer is where Farrands will lose people for sure, and I do not blame one person for not wanting to watch this series of events unfurl; for some it will be too much and I completely respect that point of view. I myself am convinced that the perpetrator is indeed O.J. but at the time the thought, and subsequent confession, by Rogers leaves me with enough doubt that I am comfortable watching this interpretation of events. If you are able to be open minded on such an inflammatory subject, then there is a lot to like in The Murder of Nicole Brown Simpson. The casting is mainly great, Nick Stahl as Glen Rogers is suitably creepy and murderous and perfect for the role, Drew Roy as Ron is okay and, whilst not in it much, the aforementioned Freeman is convincing as O.J. himself, but it is Mena Suvari who carries this film. Playing most of the scenes either alone, or in a heightened emotional state, Suvari brings a character many only know from the pages of a newspaper to life. She is sympathetic and, whether you think it was The Casanova Killer or O.J. that perpetrated the final brutal act, by the time that happens you’ll hate O.J. for the mental torture he inflicts anyway and Suvari plays this particular victim supremely well.

The film is not perfect, the phantom ghost rape scene is ridiculous and not needed as it holds no part of the plot together and you didn’t need one silly scene to prove Brown Simpson was suffering mentally as you had a fantastic actress already doing that job. Also the inclusion of real life footage at the end is brilliant but I would have had a different running order or maybe placed the scenes with Rogers before the footage, but the real life 911 call from Nicole Brown Simpson, whilst an audible O.J. is tearing up the house in the background, that plays over the final credits is haunting and I genuinely wasn’t ready for it, another inspired moment in a film that is very good but will probably upset more people than it will please.