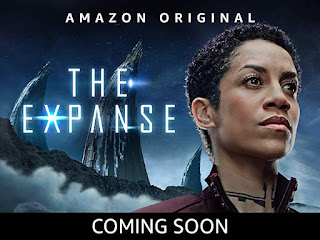 Friday 13th December is going to be lucky for fans of The Expanse as that's when Season 4 is due to drop on Amazon Prime Video. In preparation for that, Kevin Smith has done a video recap of the first three seasons to get everyone up to speed...

In case you're wondering about the backdrop to the video, by the way, The Expanse is "A show known for its visual effects. Kevin assumes he’ll have access to the same high-calibre graphics throughout the recap. He shows off his green screen prowess while summarising 30 hours of action-packed TV, unaware special effects were never planned to be added."

That was nice of them...

Season 2: In this noir thriller set two hundred years in the future, the case of a missing young woman leads a washed-up detective across the solar system to uncover the greatest conspiracy in human history.

Season 3: As the Rocinante crew digs deeper into the search for Prax's missing daughter, the war between Earth and Mars turns deadly in ways the solar system has never seen. But a new threat in the outer reaches of the Belt could prove much more dangerous, threatening to test the very future of humanity.

And coming up: Season 4 of The Expanse, its first as a global Amazon Original, begins a new chapter for the series with the crew of the Rocinante on a mission from the U.N. to explore new worlds beyond the Ring Gate. Humanity has been given access to thousands of Earth-like planets which has created a land rush and furthered tensions between the opposing nations of Earth, Mars and the Belt. Ilus is the first of these planets, one rich with natural resources but also marked by the ruins of a long dead alien civilization. While Earthers, Martians and Belters manoeuvre to colonise Ilus and its natural resources, these early explorers don’t understand this new world and are unaware of the larger dangers that await them.