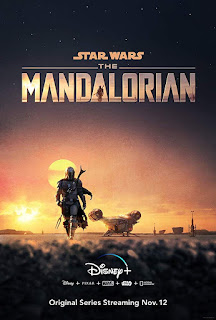 The Mandalorian was a flagship title for the launch of Disney+ in the US this week. Our own bounty hunter Alwyn Ash watched the first episode...

Well we were expecting interesting things with Disney's new Star Wars project - and The Mandalorian finally launched on Disney+ on 12th November 2019. The big question is, has it lived up to expectations?

The opening episode follows a Mandalorian bounty hunter who arrives on a planet far from New Republic entanglements to capture an alien for bounty. After the target is placed in carbon freezing for transport, the Mandalorian visits a new client who clearly has Imperial connections - the accompanying Stormtroopers are a dead giveaway! What we have to realise is that it has been five years since the fall of the Empire and various Imperial groups have scattered and dug in wherever they can. This client gives the bounty hunter information that will lead to the capture of a fifty-year-old target. This is where the episode will take a very intriguing turn. If you don't want spoilers then I suggest avoiding the Internet until you've watched The Mandalorian's first episode.

As for its visual style and storytelling, I'm glad to say it ticks so many boxes. It really does return to the western in space feel, bringing into play lots of familiar tropes from previous movies. It most certainly has that Star Wars feel, from battered robots to aliens that speak Huttese.

What I'm really looking forward to with this series is exploring parts of the galaxy that don't involve Jedi Knights or Sith. For a few years now Star Wars fans have created amazing short films on YouTube, and their ideas have amazed me. The Mandalorian undoubtedly seeks to unearth more of this galaxy. The possibilities are endless.

Though his role was brief in both The Empire Strikes Back (1980) and Return of the Jedi (1983), Bobba Fett has always been one of my favourite characters. Of course, he was never a true Mandalorian.

Now we have a chance to see one at work...

A few things have been announced about this new series: firstly, the bounty hunter's name is Dyn Jarren; secondly, a second season has already been given the green light; and thirdly, if successful, The Mandalorian could lead to a movie based on the series. It's all rather exciting.